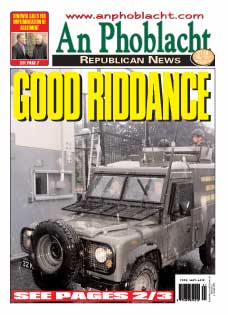 Commenting on Peter Hain's announcement, on 1 August, that the British Government has put in place a comprehensive plan for demilitarisation in the Six Counties, Sinn Féin's Conor Murphy said, the party wanted the demilitarisation of the North to be completed as soon as possible. "Sinn Féin wants a speedy and comprehensive end to the military occupation of the North," he said.

The Sinn Féin MP for Newry/Armagh said local people in areas affected by British Army installations and spy posts will welcome Hain's plans to remove what he called, "these eyesores" from around their homes.

Murphy explained that in all negotiations that Sinn Féin held with the British Government the demand for demilitarisation was always high on the agenda.

Meanwhile Sinn Féin President Gerry Adams joined the residents of Divis Tower in West Belfast in welcoming news that the British Army spy post that has been on top of the tower block for almost 30 years is to be finally dismantled.

"I think the end of the British army on Divis Tower and right across the Six Counties will be a great relief for those who live under shadow of a very, very unwanted presence", he said.

Speaking this week Hain said: "In April 2003 the Government set out proposals to normalise the security profile across Northern Ireland when there was an enabling environment. Following the IRA statement of 28th July, we are now moving quickly to begin that process. Today I am publishing planned normalisation programme agreed with the Chief Constable and the GOC.

"My first and over-riding priority and that of the Chief Constable and the GOC is the safety and security of the people of Northern Ireland. We will not do anything that will compromise that.

"Provided the enabling environment is established and maintained this programme will be achievable within two years though if the conditions are right to move more quickly in implementing elements of the plan, the Government will do so.

"The programme published today will see the creation of an environment which will allow the return of conventional policing across Northern Ireland."