‘Unionists have nothing to fear’ 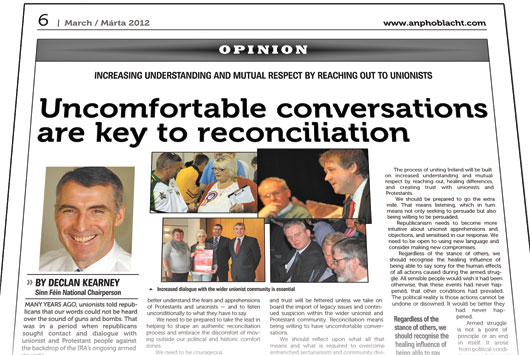 Reverend Harold Good, a witness to IRA decommissioning, described the An Phoblacht article as ‘truly remarkable’

DECLAN KEARNEY’S ‘Uncomfortable Conversations’ article in the March issue of An Phoblacht (about post-conflict initiatives and reaching out to unionists) made headlines in the mainstream media. Most importantly, though, its sincere intent was appreciated by many people, unionists and non-unionists alike.

News programmes on the BBC, UTV and RTÉ, Hearts & Minds, Today with Pat Kenny, newspapers and social media noted not only the importance of the article by the National Chairperson of Sinn Féin but also its potential. The fact that it appeared in An Phoblacht was also highlighted and commented on for its significance.

Declan Kearney wrote that increased dialogue and engagement with the wider unionist and Protestant community is essential but this poses a massive challenge to republicans. We need to be prepared to take the lead in helping to shape an authentic reconciliation process, he said, and embrace the discomfort of moving outside our political and historic comfort zones. “We need to be courageous,” he said.

And the senior Sinn Féin figure explained that achieving reconciliation and trust will not happen unless we address “legacy issues” and continued suspicion within the wider unionist community. “Reconciliation means being willing to have uncomfortable conversations,” he said.

Declan Kearney reiterated the republican position and that this is not about disowning the armed struggle or saying the IRA was wrong. “Absolutely not,” said Eibhlin Glenholmes (once dubbed ‘Britain’s Most Wanted Woman’ for IRA attacks in England and mainland Europe), when asked on UTV about the An Phoblacht article. “We didn’t go to war — war came to us.”

She added, however: “I have no qualms about apologising for any hurt. I regret that so many of our lives were lost.”

This was a point that many unionists saw as important when Declan Kearney wrote: “We should recognise the healing influence of being able to say sorry for the human effects of all actions caused during the armed struggle.”

Reverend Harold Good, the former Methodist President who was a witness on behalf of the unionist community to IRA decommissioning, described the article in An Phoblacht as “truly remarkable”.

“It reads as a genuine offering from one part of a hurting community to another,” the respected clergyman said.

The article “does not avoid the difficult and contentious discussion of political conditions and what republicans will refer to as context”, he added. He pointed out that Kearney is unambiguous in his understanding of the need for that most difficult, but essential, word “sorry”.

“What a challenge to us all,” Rev Good added.

“The time has come to take each other seriously, to respond to clearly genuine ventures without assumption of ulterior motive or hidden agenda.

“Talk, truth and trust - these are the three Ts that will release us from our tragic past and take us to a new place, whatever its shape or form.”

Rev Dr David Latimer of the First Derry Presbyterian Church said it takes courage to let go of old grudges, and faith to walk down a new road. Change from being “warring adversaries to friendly allies will only materialise when all sides agree to engage in uncomfortable conversations”.

David Adams, a former member of the UDA and the Ulster Democratic Party, headlined his Irish Times column on 22 March: ‘Sinn Féin’s clarity over bridge-building is impressive’.

He described the Kearney article as “an impressively open and honest piece” in which the Sinn Féin spokesperson “makes crystal clear that the all-island state envisaged by mainstream republicans will indeed be genuinely reflective of, and sympathetic to, all of its peoples”.

Of course, unionists were by no means universally welcoming.

The DUP’s Jeffrey Donaldson dismissed it as “a hollow publicity stunt”. The front-runner for the Ulster Unionist Party leadership, Mike Nesbitt, also expressed scepticism. Perhaps with this in mind, unionist commentator David Adams ended his column:

“The distrust that Sinn Féin must seek to overcome — which is often inexplicable even to the majority of those who hold it — was not caused but reinforced by the recent 30-odd years of conflict. Deep bitterness, centuries old, exists on all sides. I wish Sinn Féin well — they are at least making the effort.”

Brian Rowan spoke to sceptical unionists in another analysis piece. He said that if republicans are involved in a genuine initiative “then we need momentum, not stalling; quicker, not slower”.

“And if the initiative is not serious, then there will be only one loser. Unionists have nothing to fear.”