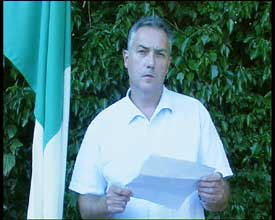 The historic IRA statement was visually recorded and read by Séanna Walsh at the request of the leadership of Óglaigh na hÉireann.

Séanna served over 21 years as a Republican Prisoner of War in both the Cages and the H-Blocks of Long Kesh. He was among the first republicans 'on the blanket' after his arrest in 1976, the year the British Labour Government began its policy of attempting to criminalise IRA prisoners. Séanna was a friend and cellmate of Bobby Sands, the Officer Commanding in the H-Blocks and the first of the Hunger Strikers who died in 1981.

Since his release Séanna Breatnach has played a key role working with Sinn Féin's negotiating team and advancing the republican peace strategy.