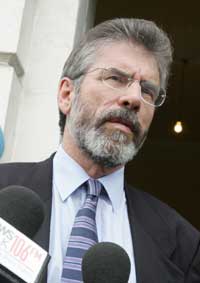 On 6 April this year Gerry Adams asked the IRA to "take courageous initiatives that will achieve your aims by purely political and democratic activity". "The way forward is by building political support for republican and democratic objectives across Ireland and by winning support for these goals internationally", stated Adams in his appeal.

"Today's decision by the IRA to move into a new peaceful mode is historic and represents a courageous and confident initiative. It is a truly momentous and defining point in the search for a lasting peace with justice. I commend the commitment of those who have taken this decision and I appeal for unity and solidarity among all Irish republicans on the island of Ireland and beyond and for the struggle to be carried forward with new energy and enthusiasm.

"The IRA decision presents an unparalleled challenge and opportunity for every nationalist and republican.

"There is an enormous responsibility on us to seize this moment and to make Irish freedom a reality. I would urge all Irish nationalists and republicans, including those who have shown such commitment over the years as Volunteers of the IRA to put their undoubted talents and energy into building a new Ireland.

"It places a clear onus on the British and Irish Governments to fully and faithfully implement the Good Friday Agreement.

"In particular this means an end to pandering to those unionists who are rejectionist and the British Government must urgently address the demilitarisation, equality and human rights agendas.

"It means the Irish Government actively promoting the rights and entitlements of all of its citizens, including those in the North.

"It means that unionists who are for the Good Friday Agreement must end their ambivalence. And it is a direct challenge to the DUP to decide if they want to put the past behind them, and make peace with the rest of the people of this island.

"Today's IRA statement can help revive the Peace Process; it deals with genuine unionist concerns and removes from the leadership of unionism its excuse for non-engagement.

"Republicans will not be surprised that our opponents will continue to try to defeat us. Initiatives by the IRA are unlikely to change, in the short-term, the attitude of those who oppose us whether in London or Dublin or within unionism. We can expect this to continue until we succeed in our endeavours.

"Today's statement by the IRA is clear evidence of the commitment of republicans to the Peace Process. The question now is whether the two governments and the unionists are prepared to take up the challenge of building the necessary next steps to a just and peaceful future.

"I am very mindful that today will be an emotional one for many republicans. I am particularly conscious of all those who have suffered in the conflict. I want to extend my solidarity to the families of our patriot dead and to commit myself and our leadership to coninue our efforts to win Irish freedom.

"The road map is clear. Sinn Féin is a party looking forward. We have a vision of a new future, a better future, and we have the spirit and the confidence to work with others to achieve this. Irish republicans and nationalists are now in a new area of struggle. There is a role for everyone in this new situation. Let us move forward together to re-build the Peace Process and deliver Irish unity and independence."

Commenting on the release of Seán Kelly, Gerry Adams said:

"I welcome the release of Seán Kelly. There are other prisoners who continue to be held, including those qualifying prisoners held in Castlerea. Sinn Féin will continue to campaign for their speedy release."