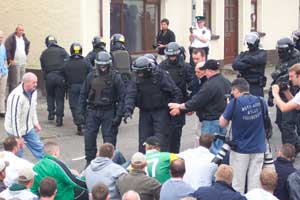 The standoff that developed in the County Antrim village of Dunloy on Tuesday 12 July was brought about after PSNI-backed Orangemen exploited a loophole in a Parades Commission determination.

After Orangemen gathered at their Hall on Station Road, just outside the village, on the Twelfth morning the loyalist band accompanying them struck up a series of Orange tunes.

According to Sinn Féin's Philip McGuigan the loyalist band was in breach of the Parades Commission determination, barring them from playing music.

However the loyalists justified their actions saying they were not marching when they played the tunes but were in a standing position at the time.

Nationalist residents incensed at the actions of the Orangemen reacted to what they saw as a deliberate flouting of the Parades Commission Determination and blocked the Main Street, barring Orangemen from travelling through the town to a wreath laying ceremony at a local church.

A tense stand off then developed and PSNI riot squads, backed up by water cannon, moved in and nationalist residents then staged a sit down protest.

The PSNI confronted the demonstrators and went to remove them from the road which saw PSNI members dressed in full riot gear manhandling peaceful demonstrators off the road.

Speaking to An Phoblacht Sinn Féin's North Antrim assembly member Philip McGuigan said that local residents reacted to the actions of the Orange Order and accused them of, "flagrantly abusing the good nature of the people of Dunloy".

He explained that when the loyalist band remained standing to play music they were commiting a public order offence and should have been stopped by the PSNI.

"The PSNI facilitated the Orangemen to exploit the loophole in the parades commission's ruling. They were told that it was a public order matter yet they did not intervene and seemed happy to facilitate Orangemen rubbing nationalist noses in it. The residents in this village are very angry".

McGuigan added that no one has a problem with Orangemen laying wreaths but they do have a problem when they form in bands and play sectarian tunes.

"They are using the wreath laying ceremnony as an excuse to get a parade", concluded the Sinn Féin politician.