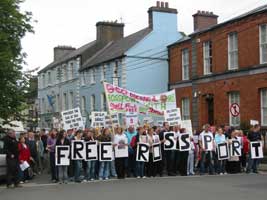 Protests calling for the release of the Rossport 5

Rossport Campaign - Why was Shell given a High Court Injunction

Five people from Mayo have stood against the state and three of the world's largest oil conglomerates. They have been jailed, criminalized, threatened by the President of the High Court with loosing their few possessions, and told that their request for a court hearing of their case is ludicrous.

The situation raises many questions, which the Dublin Government has to answer.

Why was Shell given a High Court injunction based on an illegality?

It was not legal for Shell to construct the pipeline until the Minister gave his consent. Consent, despite Shell's off repeated claims in court, to the contrary, has not been given.

In court on Monday, 11 July Shell agreed that there was no consent. Yet Shell had sought and secured leave of the court to have five people jailed because they were interfering with something Shell wanted to do which was illegal.

Why has Minister Dempsey not established an "independent monitoring and auditing regime" before any gas passes down any pipeline, as he promised to do.

Why has the minister not learned from the government's mistake, 26 years ago, in its bland acceptance of Gulf Oil's assurances concerning safety at the Whiddy Island terminal in Bantry Bay, (where 51 people lost their lives in the Betelgeuse disaster) that the oil industry cannot be trusted to put safety before profits or even to provide reliable safety information.

Why did Minister Dempsey first commission a report from BPA, a company part owned by Shell, to review the health and safety aspects of Shell's proposed project. And why then did he subsequently commission a report from AEA Technology, a company which does business with Shell, and which sanctioned British Nuclear Fuel's Sellafield plant, which has been dogged by notorious lapses in Safety.

Why did An Bord Pleanála agree to the pipeline, overruling the opinion of its own technical and expert advisor, Kevin Moore, that the pipeline should not go ahead?

Why was legislation, governing the conditions for oil and gas exploration, which imposed royalties and fiscal terms ensuring some benefit to the Irish people from exploration of our resources, changed by Ray Burke in 1987, such that no benefit whatever accrues to the Irish Nation from the resources found in Irish waters?

After the Tribunal's discovery of Ray Burke's corruption, why has the government not begun an inquiry into the perverse changes, which are treacherous to the interests of Ireland, which he, and his government, made to the legislation which was in place?

In particular why has there been no attempt by the state to discover what passed in the meeting Burke held with the oil companies, against the advice of his civil servants, after which the terms and conditions previously attached to the licenses were changed?

Why did Dessie O'Malley give away the exploration rights in Irish waters to Marathon, for the sum of £500, such that all companies wanting to take up the current round of licences have henceforth to sub-let them from Marathon?

Why did successive governments not insist on access to the results of prospecting for hydrocarbons in Irish waters, especially after Shell was caught lying about the extent of the reserves they claimed to have in Nigeria, which forced the resignation of Philip Watts, their CEO at the time?

Why has Minister Dempsey called for applications for new licences, without a review of the 1992 terms and conditions upon which they are to be issued?

What was the quid pro quo from the Fianna Fail Party made in return for the funding of their Galway race tent by the oil companies?

And why, when it was realised the immense wealth represented by the Corrib Field alone, estimated to be in the region of between €12 billion and €21 billion, did the government not seek to rectify the extraordinary position that Ray Burke had treacherously left. A situation- whereby the entire value of the gas had been given to the Shell consortium, without any contribution whatsoever to the Irish economy, except possibly 25 jobs, which are unlikely to go to Mayo people.)

Why didn't the government welcome with open arms every objection the local community raised to the Shell plan?

Demands of Shell to Sea Campaign

The campaign wants the authorities and state to:

* Stop all illegal development in Rossport

* To cease all operations in Erris, onshore and offshore, pending a full hearing of the issues

* Clean the gas and hydrocarbons at sea,

* Vindicate the Rossport 5 and expunge their criminalisation by Shell

* Renegotiate the overall deal for the Irish people

* Make those responsible for the project accountable, including calling for the resignation of Noel Dempsey, Dermot Ahern and Frank Fahey who have presided over this scandalous affair.