"Lucky that lives not lost"- Kelly 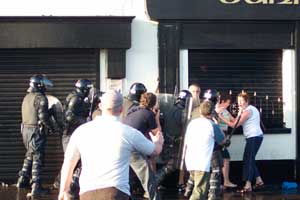 Gerry Kelly, an eye-witness to events as they unfolded in Ardoyne on 12 July gives his first hand account of the situation in an interview with An Phoblacht .

As eye-witness to Tuesday's events in Ardoyne and as political representative for North Belfast can you give us your perspective on what transpired?

Well, fundamental to what happened in Ardoyne this week is the issue of anti-Catholic organisations demanding the right to walk through an area where they are not wanted. If such unwanted and contentious marches, of which there are only a small number, did not take place, then there would be no trouble. The decision of the Parades Commission was patently wrong. It rewarded the Orange Order's refusal to talk to residents, undermining the principle of dialogue as the way forward.

"We were lucky that lives were not lost in this area on Tuesday. I wish to praise the Ardoyne residents, the local clergy and those members of Sinn Féin right up to national leadership level who have been involved for weeks in attempting to work out a situation whereby we would have a calm day.

"There were two protests in the area on Tuesday. One in the morning which was a small and involved the youth of the area sitting passively on the road in a peaceful protest. These young people showed great pateince, courage and commitment to the peaceful nature of the protest, as they were removed in a quite heavy-handed fashion by the PSNI, and did not retaliate in any way.

"Duing the second protest in the afternoon, the protesting residents decided to move off the road just before the Orange march arrived. Again, this was a very successful protest and we had hoped that was the way the day would continue.

"The protests were a peaceful and dignified expression of the deep anger among the entire community of Mountainview, Ardoyne and the Dales. This myth that has been propogated of the march just passing shopfronts in Ardoyne needs to be dealt with once and for all. This sectarian march goes through three nationalist areas twice in the one day.

"Later in the day when the Orange march arrived at Twaddell I was there. There was stone throwing and insults being traded both ways beteween the loyalist crowd and nationalist youths. However it is our view that this was manageable and we were trying to prevent any escalation. But the immediate reaction of the PSNI in baton-charging nationalist youths and in using water cannon disempowered stewards to the point where they deliberately targeted the stewrads themselves with the water cannon. Gerry Adams and myslef were also deliberately targeted. Once that happened it took several hours to restore calm."

Several blast bombs were thrown during the disturbances on Tuesday, injuring journalists. The action was reportedly carried out by the self-styled 'Continuity IRA'. What is you view of the incident?

"I believe three or four people were involved. They were not from the area and they left the area immediately after the incident.

"The vast majority of people in Ardoyne were against this action. These blast bombs could have caused more injury or death. Thrown in the middle of a highly charged atmosphere with hundreds of residents, it could have resulted in a reaction leading to more deaths. This irresponsible action endangered the lives of nationalist residents. The people who carried this out don't represent the people of Ardoyne nor do they have their support.

Where do the events in Ardoyne leave the wider process of attempting to find accomodation around these marches and what effect do you think it may have on the wider political situation and the peace process?

"The problem in all of this is that those organisations who demand to walk through nationalist areas are fundamentally anti-Catholic. If those few contentious marches through areas where they are unwelcome were not taking place we would not have this trouble.

"What must be borne in mind is that several of the leading Unionist politicians here, don their Orange collarettes to take part in these sectarian and controversial marches themselves.

"Basic to any resolution of anything, whether it's high politics or local disputes or whethever, is the issue of dialogue. I am prepared to talk to anyone to get this sorted out and so are the residents.

"These events make me more determined to face down the anti-Agreement elements in the DUP, Orange Order and the UDA. I am more determined than ever to push for dialogue as the way forward on this issue and in the peace process generally."