The Gough Barracks raid - Remembering the Past 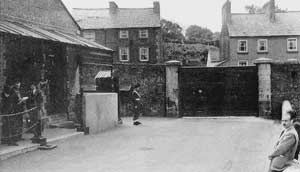 In January 1954, Leo McCormick, the Training Officer for the Dublin Brigade of the IRA, was on a visit to Armagh. As he passed Gough Barracks, the home of the Royal Irish Fusiliers, McCormick noticed that the guard on duty outside the barracks was armed with a sten gun without a magazine. McCormick concluded rightly that Gough Barracks was in effect being guarded by an unarmed guard.

On his return to Dublin, McCormick informed the Dublin Brigade of his chance observation. Alas, McCormick was not to see the end result of his information, as he was arrested soon after and received four years for possession of a document.

By April, the General Head Quarters decided that they would raid Gough Barracks for arms. But first, more information was needed.

Eamon Boyce the Intelligence Officer of the Dublin Brigade, was asked to travel up to Armagh and check out the barracks. Boyce travelled up many times and soon had a detailed account of life outside the barracks. But GHQ wanted more inside details. Charlie Murphy got over this problem by asking Seán Garland to go up to Armagh and enlist in the British Army.

Not long after Garland's enlistment, a stream of maps, documents, time schedules and even photographs flowed into GHQ for processing. Finally, a last intelligence coup was arranged. Using Garland's information, the IRA got inside the barracks to have a look around.

On a Saturday night in May, Boyce and Murphy slipped into the barracks as 'guests' at a weekly dance. With them they brought a girl, Mae Smith, who was later to become chairperson of Sinn Féin. After a few dances, Garland took Mae outside for what his fellow soldiers assumed was an hour of light passion but was in fact a detailed tour of the entire barracks.

The operation was launched on 12 June 1954, from a farm just outside Dundalk. A large red cattle truck had been commandeered at the last moment and 19 IRA men, about half of the Dublin Brigade, climbed in and were informed as to what their target was. It was almost 3 o'clock on a busy Saturday afternoon when the cattle truck and a car drove into Armagh.

Paddy Ford got out of the car and walked over to the sentry and asked him about enlisting in the British Army. While the sentry was dissuading Ford of what he considered a foolish course of action, he looked down into the barrel of a .45 calibre colt revolver in the perspective recruit's hand. As the sentry was held at gunpoint, three IRA men went past him into the guardhouse. The sentry was then brought in after them. While the sentry was being tied up, a new IRA sentry, complete with British uniform, white webbing belt, regimental cap and sten gun with magazine stepped out to stand guard over Gough Barracks.

As soon as the IRA sentry appeared, the cattle truck drove through the gate and came to a halt outside the arsenal door. After fumbling through 200 keys, Eamonn Boyce found the right one and opened the armoury. Murphy raced up the stairs and in the first room two British soldiers demanded to know what a civilian wanted inside the barracks. Murphy had some trouble getting his revolver out of his pocket and was further embarrassed when the two soldiers refused to put up their hands. However, another IRA man arrived carrying a Thompson sub machine gun, which quickly convinced them to do as they were told. Posting a Bren gun at the armoury window to command the barracks square, the IRA began stripping the armoury.

During the course of the raid a woman, noticing something was wrong, stopped a British officer in the street and urged him into the barracks to investigate. Once inside the gate the officer was taken under control and, protesting that he was an officer and a gentleman, refused to be tied until a gun was put to his head.

An NCO then noticed what was happening, got into a lorry and drove for the gate, intending to block the exit. But an IRA man (later to become editor of An Phoblacht) stood at the gate brandishing a revolver and shouted "Back". He forced the NCO to reverse the lorry. The NCO was placed under arrest in the guard room. By the end of the raid, the IRA had tied up 19 British soldiers and one civilian.

In less than 20 minutes the job was done. The lorry carrying 340 rifles, 50 sten guns, 12 bren guns, and a number of small arms drove out of the barrack gates and rumbled through Armagh in the direction of the 26 Counties. Eamon Boyce and the group in the car followed after locking every gate and door for which they could find keys (the keys were later auctioned in America to raise funds for the IRA). At 3.25pm the first alarm in the barracks was given but it was not until 5 o'clock that the general alarm was given and by that time the big red truck was long gone.

The raid for arms in Gough Barracks gained international attention. The IRA, which had been described by some as moribund since the '40s campaign, had once more risen from its slumber to strike a blow against the forces of occupation. The raid awoke a calling in many to join the IRA and take part in the Border Campaign, which kept alive the flame of republicanism through to the present time.