The Jacks are back 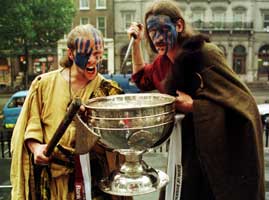 Dublin and Meath... It's a tribal thing!

As the Dublin team celebrated at the end of Sunday's victory over Meath, someone behind me remarked that you'd have thought they had won the All-Ireland. Not yet, my friend!

Seriously, it was not the All-Ireland, it was a Leinster quarter-final but it was the manner of the victory and the opposition that turned this into more than an ordinary match in early June.

Meath and Dublin once again proved their crowd pulling ability, attracting 66,000 on a bank holiday weekend. Looking at the Wexford/Carlow game, I would say that not more than 7,000 or 8,000 were there just to see them but they did provide some excellent entertainment and it is always a privilege to see Mattie Forde in action. His three points at the end put a stop to Carlow's challenge. One thing I have to say about Forde, however, is that he might learn to be a bit more gracious. Mocking your opponent after you have scored is not calculated to win you any friends and it is not something I ever recall seeing Canavan or Keaveney or Sheehy indulge in.

Before the National Anthem and the throw-in, the huge crowd stood in perfect silence in memory of the young girls who were killed in the bus crash at Kentstown last month, and for one of the Croke Park stewards who died recently.

Dublin and Meath began in torrid style. Nigel Crawford's attempt to pick some foreign body out of Ciarán Whelan's eye was not appreciated and the Dunboyne man found himself sitting on his arse before the first ball was caught. Whelan might have gotten a straight red from another referee but John Bannon was content to flash a yellow and let them get on with it. There were one or two incidents later on when players from both sides walked a thin line but it was a good hard match and even the tackles that might have earned a sterner reaction were on the ball and upfront. That's another thing about Dublin and Meath — all that is asked is a fair field and no favour — what happens on the pitch stays there and no-one goes whinging to the newspapers or the Games Administration Committee when it's over.

Meath started well, with a white-booted Graham Geraghty leading the Dublin backs a merry dance. Geraghty provided the ball for Joe Sheridan, who cracked it against the crossbar but it bounced just far enough inside the goal line to leave Meath four points up after eight minutes. But where Dublin have collapsed, or retreated into themselves for a while, in the face of such events in recent years, the goal did not appear to set them back. By the end of the first quarter Alan Brogan had cancelled out the goal with an excellent effort from a tight angle.

There was barely time to catch a breath, then, as the action swung from end to end but Meath did enjoy their best period at the close of the first half as they pulled two points ahead, their last before the break an outstanding effort from Geraghty, who held off Paddy Christie to send over a point from near the Canal endline.

Ciara, who normally has a Homeresque appetite for Croke Park hot dogs, was too worried to eat so we just stood around at the back of the stand exchanging baleful glances and neutral words with men, women and children in green and blue jerseys. It must be a genetic thing but even the smallest child seemed to have memories of previous encounters etched into their eyes. Or maybe, like Ciara, they've heard too many stories of things that happened long before they were born to take anything for granted.

Dublin emerged from the dressing room fired up and intent on exorcising the ghosts of the recent past. To be fair, they have gone a long way towards this over the past year and proved during the league that they are becoming a hard team to beat. There has been a lot of nonsense spoken and written over the Dubs "bottling it" when things got tough; against Armagh in 2002 and 2003, and Westmeath and Kerry last year. Certainly, they had their chances to win those matches, or at least push their opponents to the very end, but I don't accept that they ever threw in the towel. It takes nerves of steel, and supreme skill and fitness and sometimes a fair sprinkling of luck to win at this level and one team is always going to have the upper hand.

It is a tribute to this Dublin team that they have grown from those defeats and come back doubly determined. In that, they are following in the footsteps of the team of the late 1980s and early 1990s, who endured heart-breaking setbacks in finals and semi-finals before winning the All Ireland in 1995. It is still early days, but they are getting there and they will be hard to beat.

The former Miami Dolphins coach Don Schula once said: "Sure, luck means a lot in football. Not having a good quarterback is bad luck." Stephen O'Shaughnessy, the Dublin left corner back, ensured that the Dubs were lucky on Sunday. The Lucan man was outstanding and broke up several Meath attacks that might have ended in scores when Meath needed them most. He caught balls, tackled and put his hands, feet, head and shoulders in at crucial moments, in the process shipping some hefty challenges himself. In a game where most players on both teams excelled themselves, O'Shaughnessy, for me, was the best player in blue.

When Dublin supporters start to sing the Wolfe Tones song about the 1979 Leinster final — the one where "Dubs will never falter, and Dubs will never yield" — you know that there is an expectation concerning, but more importantly a respect for, the current wearers of the county senior jersey. There is no greater tribute to a Dublin football team than to be compared to the one that holds the record for consecutive Leinster titles. They are beginning to earn it...