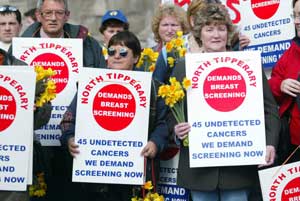 In recent weeks, the issue of breast cancer has been raised endlessly. With the diagnosis of high-profile young women such as singers Kylie Minogue and Anastasia, many women have come to the realisation that they could be next.

The issue of breast cancer is a very emotive one; for women it is their worst nightmare. But equally for their families, it is frustrating watching a love one suffer needlessly because the proper detection and treatment facilities are not available. Many of us know someone in her 40s with breast cancer and therein lies the reason we are afraid.

It's now over five years since the 26-County national breast cancer screening programme, Breastcheck, was launched. It was expected that it would be nationwide within two years. Yet five years later, it remains limited to a few counties, with the West and South of the country having no screening service.

The current Health Minister, Mary Harney, announced last month that the programme would be in place in the South and West by 2007. Women in these areas are no doubt asking themselves why some of the €550 million invested in cancer services in the last four years has not resulted in nationwide screening.

Breastcheck has been marked by empty promises, spin, misinformation and attempts to blind the public. People have little or no faith in the delivery of this service to the West and South of the country by 2007 and when you look at the government's record, it's hardly any wonder.

In 2000, the Breastcheck Screening Programme was launched, providing breast screening for women aged between 50 and 64.The programme was initially piloted in the East, North-East and the Midlands.

Breastcheck submitted a business plan for a statewide rollout in July 2002 but that timetable slipped repeatedly. In 2002, according to Breastcheck's annual report, the programme exceeded its target uptake rate of 70%, with 410 cases diagnosed early — a clear indication of the need for nationwide screening, and the programme's effectiveness at detecting early cancer. However, despite repeated concerns from many sectors, nothing happened.

It wasn't until 2003, three years after its inception, that Minister of Health Mícheál Martin announced that Breastcheck would be rolled out nationwide. Figures released from the National Breast Cancer Institute in the same year showed 1,700 women were diagnosed with the disease.

However, it took until September 2004 before any funding was announced for the programme. The Irish Cancer Society in the same year expressed concern that cases of breast cancer were at an all-time high. They re-assured the government that programmes such as Breastcheck had significantly reduced deaths from breast cancer in other countries.

In 1993, breast screening for the entire population in the Six Counties was introduced. It is now reaping the benefits, with deaths from breast cancer falling by 4% per annum, with a cumulative 30% drop in breast cancer deaths in the decade since screening began.

By contrast, the breast cancer death rate in the 26 Counties has remained static, despite partial breast screening in 2000. An all-Ireland cancer statistics report issued in September last year clearly suggested that the low survival rate in the South is due to late diagnosis, when treatment is least effective, principally due to the lack of a full breast screening programme.

The report raised many issues, such as quality of care, healthcare resource utilisation and the structure of our health services. The statistics for breast cancer are a classic example of how both health systems on the island can learn from one another.

It is generally accepted that the breast screening service should be readily available free of charge to all women, regardless of age or location. Breast cancer kills more women aged 35 to 54 than any other disease, yet they are not screened. In the West of Ireland last year, 54 women under the age of 45 died of breast cancer.

Irish women are facing discrimination because of their age or location. The message is, if you're not in the correct age group or right part of the country, you are irrelevant.

With the recent revelation that women in Donegal are opting to have a mastectomy rather than face a six-hour journey for ten minutes of radiation treatment in Dublin, the issue has once more surged into the limelight. Alternatively, women from the county have the option of living away from their families for six weeks while receiving treatment. However, for many women, that prospect is much worse than radical surgery.

"Donegal patients could be served across the border," he said. "People in Derry and Fermanagh have to travel to Belfast for cancer treatment, while we here in Donegal must travel to Dublin. Cross-border cooperation in the provision of services would benefit everyone in counties Donegal, Derry and Fermanagh. It is time for a new approach to health services, in particular on a cost-effective, cross-border basis. It is time for the government to agree and promote an all-Ireland health service."

The issue of lack of treatment resources has dominated much of the headlines on this issue. Sinn Féin TD Caoimhghín Ó Caoláin has stressed the need for emphasis on treatment as well as detection. Speaking on Breastcheck at a Cancer Care Alliance Press Conference, he stressed:

"If radiation oncology services are not put in place, much of that work will be in vain, because treatment will not be available for those diagnosed. All the resources on the island of Ireland need to be taken into account and cross-border solutions included in plans for expansion of services. It is time to put the dreadful health services associated with the 1980s behind us and provide adequate and efficient treatment services for all those in dire need of it."

Breastcheck says that the results of the first round of nationwide screening would result in 141 new cases detected in the West and 174 in the South. It says the cost of extending their services to the West and South would be €13.1 million initially and €12.6 yearly afterwards. It seems a very small price to pay for a measure that is guaranteed to save lives.

Meanwhile, there is tension between Fianna Fail and the PDs on the issue. Fianna Fáil Senator Margaret Cox recently launched her own public petition and urged people to put 'constant pressure' to deliver on the government (that's her party, who are in government and responsible for running the state, in case you're confused!)The PDs' response was predictable, with TD Noel Grealish accusing her of 'scaremongering'. Cox hit back, maintaining "it's not about party politics". Will Fianna Fáil let their partners in shame take the rap for the health system? I doubt they could resist.

But for the women who have breast cancer, nothing changes. They must endure the defects of the system and hope they don't end up another statistic on the list of women who died as a result of the government's failure to extend the Breastcheck service.

Some facts on Breast Cancer

• Ireland along with Britain, Holland, Denmark and Belgium has the highest occurrence of the disease in Europe.

• Breast cancer kills more women aged 35 to 54 than any other disease.

• There are nearly 1,900 new cases in Ireland every year

• Irish woman's risk of developing breast cancer is 1 in 13. This is 20-30% above the European average

• Why is it important to find cancer early?

For many types of cancer, it is easier to treat and cure the cancer if it is found early. There are many different types of cancer, but most begin with abnormal cells growing out of control, forming a lump that's called a tumour. The tumour can continue to grow until the cancer begins to spread to other parts of the body. If the tumour is found when it is still very small, curing the cancer can be easy. However, the longer the tumour goes unnoticed, the greater the chance that the cancer has spread. This makes treatment more difficult.

The Breastcheck programme (www.breastcheck.ie) is about the extension throughout Ireland of such a mammogram programme. This breast screening service is free but is only available so far in the East and Midlands.