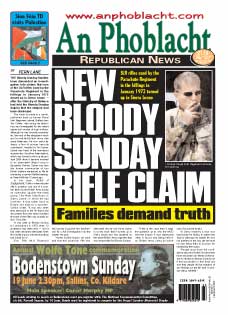 The Bloody Sunday families have demanded an investigation into claims that one of the SLR rifles used by the Parachute Regiment in the killings in January 1972 turned up in Sierra Leone — after the Ministry of Defence had told the Bloody Sunday Inquiry that the weapon had been destroyed.

The claim is made in a newly-published book by former Royal Irish Regiment colonel, Belfast-born Tim Collins, who during his time in Iraq was investigated for the violent abuse and murder of Iraqi civilians. Although he was formally exonerated, the mud of the allegations stuck and he left the British Army with some bitterness. He now works for Aegis, a firm of private 'security consultants', headed by Tim Spicer. Spicer was head of the mercenary organisation Sandline International, which was forced to shut up shop in April 2004 when it became involved in an attempted illegal coup in Equatorial Guinea. Spicer was also the former commander of two British soldiers sentenced to life for murdering unarmed Belfast teenager Peter McBride 13 years ago.

In his book, Rules of Engagement, Collins writes that the rifle in question was one of a number taken by the British Army during an operation against the rebel group, The West Side Boys, in Sierra Leone, in which he was involved. It was taken back to Britain and kept as a souvenir. Collins writes: "It was only when they were back to the UK that it was discovered from the serial numbers that one of the rifles was actually an old 1 Para rifle.

"It was used on Bloody Sunday in Londonderry in 1972 when 13 protestors had been shot — and it had been declared destroyed when the Saville Inquiry into the shootings had asked for it."

Sinn Féin MLA Raymond McCartney supports the families' call for a full investigation into the matter. He says:

"At the Saville Inquiry we were told that this particular rifle was destroyed yet we now have claims in a new book that it turned up in Sierra Leone and was captured by the same British Army regiment that was responsible for Bloody Sunday.

"If this is the case then it begs the question as to why the MOD told the Inquiry it was destroyed when in fact it was being held in an British Army camp as some sort of macabre trophy.

"In Derry recently a man was imprisoned for failing to attend the Inquiry although he stated he was not present on the day yet we have no one being held to account for misleading the inquiry.

"People must have full confidence that the British Government have disclosed all relevant information in relation to Bloody Sunday but if the accusation in this book are true then people will be sceptical of any findings as the full truth is obvious being withheld."