Ireland and the EU Constitution 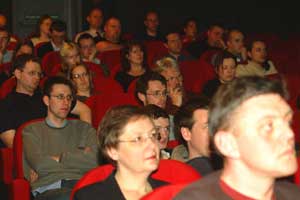 European United Left/Nordic Green Left brought together 15 speakers from across the EU for a two-day conference last weekend on the content and implications of the EU Constitution.

The event, held in Dublin's Irish Film Institute, involved speakers from Ireland, England, Sweden, Finland, France, Catalonia and Italy. Politicians, academics and social organisations explored a wide range of aspects of the Constitution and outlined their experience of the ongoing campaigns against the treaty in their own countries.

Saturday morning opened with the academics platform, looking at those new elements contained in the Constitution. Author of a critical introduction to the EU and former GUE/NGL researcher for 18 years, Steve McGiffen, looked at the institutional and economic policy aspects of the Treaty, concluding that the text rendered the EU less democratic and more liberalised. The net effect would be a further reduction in popular legitimacy and greater levels of social and economic inequality.

UCD academic and long-standing feminist activist, Ailbhe Smyth, explored the issue of rights and equality and highlighted the many weaknesses both in the Charter itself and the absence of any mechanisms for monitoring or compliance.

Gerard McCann from St Mary's in Belfast dealt with issues of international trade and the impact of the trade agenda as laid out in the Constitution. He placed these elements in the broader context of EU trade policy as it has developed since the Treaty of Rome. Gerard said that by placing the economic needs of Transnational Corporations and overdeveloped world governments above the needs of the world's poor, the EU was promoting an agenda that would deepen levels of global inequality, poverty and instability.

Saturday afternoon brought together three MEPs who outlined their reasons for opposing the Constitution. Esko Sepannen from the Finnish Left Alliance and GUE/NGL spoke on issues of neutrality and militarisation, Bairbre de Brún from Sinn Féin and GUE/NGL dealt with issues of criminal justice, and Bernat Joan from ERC and the Greens/FEA group in the European Parliament dealt with issues of language, culture and self-determination. All three MEPs argued for a vision of the EU that was pluralist, demilitarised, democratic and respected human and civil rights. All concurred that the Constitution worked against these fundamental principles.

The final session of the day was originally planned to be a debate between Mary Lou McDonald MEP arguing against the Constitution, and a representative from the government making the case for the treaty. Eighteen separate pro-Constitution speakers were invited but none were willing to take up the challenge. Conference organiser Eoin O Broin, who introduced the session, said that the refusal of the pro-treaty side to engage in the debate was a sign of the weakness of their own argument and demonstrated a lack of political leadership.

In place of the original debate, Mary Lou McDonald gave a keynote address dealing with issues of democracy, national parliaments, neutrality, economic policy and trade justice. In conclusion, she said: "Sinn Féin believes that another Europe is possible; we want to play an active and forward looking part in building that Europe; we will be vigorously opposing the Constitution in the forthcoming referenda north and south. What is clear is that the first step in this journey is the rejection of the proposed EU Constitution."

Mary Lou was joined on the stage by Lilian Halls French from the Feminist Initiative Against the Constitution and by Steve McGiffen. Lilian spoke about hr experience in the French campaign, while Steve, formerly an activist with the Dutch Socialist Party, outlined how the campaign was going in Holland. Both speakers emphasised that the strength of both campaigns was that they were led by the left.

Sunday saw two debates, the first bringing together five speakers from four different EU member states. Roger Cole from the Peace and Neutrality Alliance spoke about the long tradition of Irish military neutrality and highlighted the dangers contained within the Constitution with respect to the militarisation of the EU and its impact of the neutral states.

Claudio Moloni from ATTAC Italy stressed the neo-liberal elements of the Constitution and their impact of public services at home and levels of poverty outside the EU.

Brian Denny from Trade Unionists Against the EU Constitution and Matthew McGregor from the Centre for a Social Europe dealt with the broad economic thrust of the Constitution. Lilian Halls-French make the feminist case against the Treaty, highlighting the impact it would have on women's social, economic and political position within the EU.

The final session of the weekend looked beyond the Constitution. Swedish MEP Jonas Sjostedt, Green Party Councillor Deirdre de Búrca and Sinn Féin Dublin TD Aengus Ó Snodaigh all spoke of their alternative visions for the EU and outlined some of the reforms which would be required if such alternatives were to be realised.

Jonas called for a complete rethink of the basis of the EU project. He said that the Union needs to focus on less in order to achieve more, and that its institutional structures need to be more open, transparent and brought under the control of citizens and national parliaments. Deirdre de Búrca called for a significant level of institutional reform and a major rethink on the economic and environmental basis of the Union's policies, as outlined in the Constitution. Aengus addresses issues of foreign policy and the need to replace empire building with conflict resolution.

The conference was attended by 100 people representing almost 20 different organisations. While clearly there is a lot more to be done to engage public opinion, both the quality and range of the speakers gave those in attendance much food for thought.

The conference was brought to a close by Eoin O Broin, who appealed to people, whether they were in favour, opposed or undecided, to promote debate and understanding of the Constitution and its consequences for Ireland.