US opinion rock solid behind Agreement 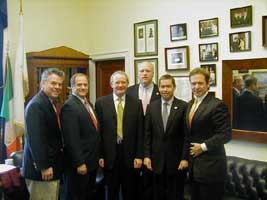 Speaking after returning from a two-day visit to Washington and New York, where he had an intensive round of political meetings, Sinn Féin Chief Negotiator, Martin McGuinness said that all shades of political opinion in the US remain rock solid behind the Good Friday Agreement.

"People in the United States recognise the enormous progress that has been made over the last ten years and are committed to building on that," he said

In December, the DUP accepted the core elements of the Good Friday Agreement. They must now be held to that position. The two governments must make clear that there will be no dilution or erosion of the Agreement or its crucially important provisions on power sharing, equality and the all-Ireland institutions

"The DUP can be part of the process of making peace or they can stand outside. That is their choice. But they cannot be allowed to veto a process, which has the overwhelming support of the Irish people and of international opinion."

Sinn Féin General Secretary Mitchel McLaughlin reitereated on Wednesday that the two governments have to make it 'crystal clear' to the DUP and others that there can be no dilution of the Good Friday Agreement.

"The DUP's increased mandate must bring with it a more responsible approach to politics," he said. "They need to accept that there will be no return to the failed policies of the past and that the days of unionist domination are gone forever. However, if they do not it is vital that the two governments ensure that the DUP cannot be allowed to block progress any further or to destroy a process which has achieved so much over the past decade."