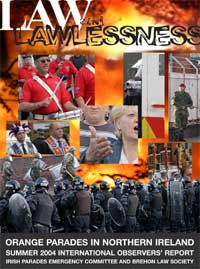 As we face into another unionist marching season, a report released on Wednesday by two international observer organisations on the 2004 marching season finds that contested Orange parades in the North continue to promote unionist paramilitary groups.

The report's publication comes just days after a unionist paramilitary display of force on a contested parade through Lurgan town centre.

Law and Lawlessness: Orange Parades in Northern Ireland, the fourth report issued by the US-based Brehon Law Society and the Irish Parades Emergency Committee (IPEC), criticises "systematic violations" of Parades Commission determinations in several contested marches through nationalist communities in 2004. It also cites the failure of the PSNI to enforce the Commission's restrictions. These systematic violations include:

·o William Borland, a leading member of the UDA, and hundreds of other rowdy 'hangers on' marching through Ardoyne on 12 July 2004 for the second year in a row, escorted by as many as 1,500 PSNI and soldiers in riot gear.

·o Displays of unfurled Ulster Volunteer Force (UVF) flags and emblems at several parades past the Short Strand neighbourhood in June and July 2004.

·o Displays of furled UVF flags at the Whiterock parade through the Springfield Road community on 26 June 2004.

Loyalist paramilitary displays have been repeatedly documented at contested parades in Ardoyne, Springfield Road, and Short Strand for the past several years, the report finds.

Members of the 2004 Brehon and IPEC delegation, which included observers from the US, Italy and France, criticised the "hypocrisy" of mainstream unionists and Orangemen for participating in the North and West Belfast Parades Forum, which includes loyalist paramilitaries, while refusing to serve in government with Sinn Féin.

The observer report also faulted the massive military and police deployments throughout Belfast in June and July, particularly the decision to deploy the paratrooper unit inside the Ardoyne community on 12 July 2004. This deployment "reflected either gross negligence or an intention to trigger violent confrontation", the report states.

"We are disappointed that the Orange Order, the Parades Commission, and the PSNI failed to prevent the promotion of loyalist paramilitaries in parades through communities that have borne the brunt of their sectarian attacks," said Seán Cahill, a spokesman for the Brehon Law Society and IPEC observers.

Irish Parades Emergency Committee (IPEC) and Brehon Law Society observers have monitored contested loyal order parades in Northern Ireland each summer since 1996. Copies of the report will be sent to government officials and human rights groups in the US, Ireland, and Britain.

Nationalist representatives in County Derry are calling on the Parades Commission to ban a planned loyalist band parade through the mainly nationalist Kilrea village, citing last year's trouble, when the PSNI fired live rounds into the air.

Tensions are set to rise after nationalists lodged objections to the parade, which will bring up to 30 loyalist bands and 1,500 marchers to Kilrea on 17 June for the parade, organised by the Boveedy Flute Band.

Coleraine Sinn Féin Councillor Billy Leonard told An Phoblacht that the ball is firmly in the Parades Commission court.

"Local people are angry at what they say is unfair PSNI and British government actions, particularly over last year's parade, when only one person faced charges resulting from the violence," he said.

Leonard criticised the PSNI's handling of last year's disturbances and added that he was unhappy with the Police Ombudsman's Office, which "took no action against several PSNI members who were involved in confrontations with nationalist residents".

Leonard said, "there cannot be a bias which results in loyalist and PSNI thuggery going unpunished when a young nationalist was arrested and charged with possession of an offensive weapon, a baseball bat, which he took off a loyalist who was attacking him.

"We put the case for banning the parade and we will be watching the Parades Commission and the PSNI carefully to see if local people are listened to."

Meanwhile ,Sinn Féin in County Down have called for a loyalist march in Ballynahinch next month to be banned after last year's march deliberately flouted a Parades Commission determination and carried unionist paramilitary flags.

And Sinn Féin MLA John O Dowd has severely criticised the Parades Commission over last Saturday night's loyalist parade through Lurgan town centre. He called on the new DUP MP David Simpson to explain what a DUP band was doing in the middle of what could only be described as UVF display.

"What we witnessed in Lurgan on Saturday night was a show of strength by the UVF in their ongoing cold war with the LVF, over 30 loyalist bands marched through Lurgan, with the majority of them displaying UVF and YCV colours. It was a clear message on behalf of the unionist paramilitary grouping to us all that they were stamping their authority on Lurgan.

"On a Saturday summer's evening, bar and restaurant owners in the town centre would normally expect a busy evening; instead, the town was practically deserted apart from loyalist bands and their supporters.

"The Parades Commission granted permission for this menacing, loyalist macho display and they have serious questions to answer. I doubt if any section of the community would want a repeat of Saturday night's events, it is about time the organisers of the parade and the Parades Commission realised that.