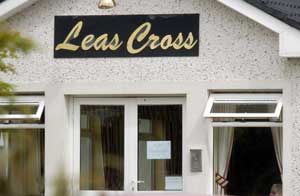 Sinn Féin Health spokesperson Caoimhghín Ó Caoláin has called for immediate government action to recruit additional inspectors of nursing homes in order to protect vulnerable elderly people. He said that people throughout the country have been absolutely outraged by the revelations of ill-treatment of the elderly in Monday night's Prime Time programme.

"The great fear is that the ordeal of people in Lea's Cross may be replicated in other nursing homes," he said. "The real scandal is that the Department of Health and Children, the Health Services Executive and successive Governments have provided no protection for elderly people in these institutions.

"It is abhorrent that millions upon millions of euros of public money has been poured into the pockets of the unscrupulous owners of this nursing home. The Health Service Executive effectively abandoned people to the regime for which the owners of Lea's Cross, the Aherns, have been responsible. What sanction under the law will they now face?

"We cannot wait for an independent inspectorate to be established, perhaps in a year's time. The Minister for Health and Children should immediately ensure that additional inspectors are appointed throughout the country and that all nursing homes are inspected within the next two months. The many people who run nursing homes responsibly and with the highest standards of care would welcome such a move as the scandal of Lea's Cross casts a shadow over them all."