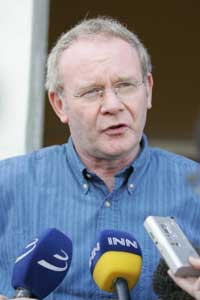 Speaking on Monday ahead of a two-day visit to Washington and New York, Sinn Féin Chief Negotiator Martin McGuinness said that DUP attempts to wreck the Peace Process must not succeed.

"Enormous progress has been made over the last ten years and that progress must now be consolidated and built upon," he said. "We need to resolve outstanding issues and see the Good Friday Agreement implemented in full. This presents challenges for all of us, for the British and Irish Governments, for unionism and for Irish nationalists and republicans.

"In their discussions with the DUP, the British and Irish Governments must make clear that there will be no dilution of the Agreement. There is a particular responsibility on the Irish Government to adopt a more assertive and active role in this process. They are a sovereign government and a co-equal partner with the British Government. They need to defend the Agreement, to protect the rights of Irish citizens and to develop a pro-active all-Ireland agenda.

"The DUP's increased mandate must bring with it a more responsible approach to politics. They can join in the process of making peace and despite their record of bigotry and intolerance we will work with them. But there will be no return to the failed policies of the past. The days of unionist domination are gone forever. The DUP cannot be allowed to block progress or to destroy a process which has achieved so much over the past decade."