Time for Ahern to rein in McDowell 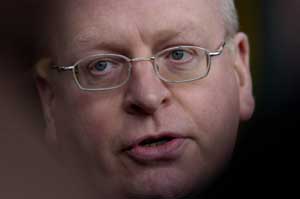 Fianna Fáil might think it's clever to have Minister for Injustice Michael McDowell acting as their Witchfinder General against republicans, but it may now be time for them to rein in McDowell, as his increasingly off-the-wall approach can only wreak havoc as efforts continue to rebuild the Peace Process.

This was very clear in the Dáil on Tuesday, when the Taoiseach differed significantly from McDowell on a key Peace Process issue — Six-County representation in the Oireachtas.

Earlier this month, McDowell said Six-County representation was "a concession which was not on the cards" and that Sinn Féin MPs should take their seats at Westminster. Sinn Féin Dáil leader Caoimhghín Ó Caoláin put this to the Taoiseach in the Dáil on Tuesday:

"Does the Taoiseach disagree with the Minister for Justice, Equality and Law Reform, Deputy McDowell, when he told the nationalist people of the Six Counties recently that their Sinn Féin MPs should take their seats in Westminster and take an oath to the queen? Was the Minister speaking for the Taoiseach and the government? Was he also speaking for the Taoiseach and the government when he said that representation in the Dáil for people from the Six Counties is not on the cards?

"Does the Taoiseach accept that when the Good Friday Agreement was achieved in 1998, he gave a commitment that this issue would be addressed? Does he recall it was substantively addressed by an Oireachtas all-party committee? Does he recall there was a clear indication and understanding that there would be such a provision where we would see an accommodation for the 18 Northern MPs within the debate process in these Houses? What exactly is the Taoiseach's position on this very important issue? Despite the current process being almost on-hold, will he continue to address this very important issue, recognising the contribution that it can make?"

The Taoiseach replied, in marked contrast to McDowell:

"As to how Sinn Féin uses the seats for which it won a mandate by way of representation in Westminster, that is totally a matter for Sinn Féin and I have no comment to make on it. I am still totally committed to the all-party committee report.

"I believe the Deputy would accept that we can only progress that matter in the right circumstances. However, I am still supportive of those circumstances because it is a good way of moving forward."

While Sinn Féin would not agree that progress on Northern representation has to depend on progress in reinstating the Good Friday Agreement, there is clearly a gulf between Ahern and McDowell in their publicly stated attitudes to this issue.