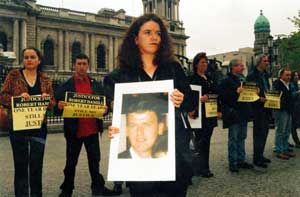 The inquiry into the killing of Portadown Catholic Robert Hamill opened in Craigavon on Tuesday. The inquiry follows the recommendation of Canadian Judge Peter Cory, who had been tasked to probe a number of controversial killings by the British and Dublin Governments.

Over 100 witnesses are expected to give evidence when the hearing begins in Belfast in November.

Robert Hamill was kicked to death by a loyalist mob in April 1997. The gang had identified their victim as a Catholic as he turned to walk towards a nearby nationalist housing estate. An armed RUC patrol at the scene refused to intervene to stop the mob attack, despite pleas from Hamill's companions, who hammered the RUC vehicle and repeatedly called for help.

After the attack, the RUC patrol made no attempt to arrest any of the killers and later it emerged that some RUC members were suspected of a cover up, which included suggesting that one of the main suspects 'burn his clothing'. The mob had chanted, "die Fenian die" as they smashed the head of their stricken victim. Robert died 12 days later, having never regained consciousness.

Opening proceedings on Tuesday, Chairman Edwin Jowett announced that the inquiry would "determine whether any wrongful act or omission by or within the Royal Ulster Constabulary facilitated his (Hamill's) death or obstructed the investigation of it, or whether attempts were made to do so; and make recommendations".

Along with the legal teams in the courtroom were observers from numerous rights watchdogs, the Committee on the Administration of Justice (CAJ) and British-Irish Rights Watch (BIRW). Maggie O'Connor of CAJ and Jane Winter of BIRW both sought to make submissions and were asked to forward them in writing.

Jowett is joined on the inquiry panel by Baroness Kathleen Richardson, a former moderator of the Free Churches of England and Wales, and Sir John Evans, former Chief Constable of Devon and Cornwall.

Speaking to the media outside the courthouse, Diane Hamill, sister of the deceased, appealed for anyone with information about the killing and subsequent RUC cover up to come forward. She singled out members of the RUC, asking them to "examine your consciences. Do the right thing."

Sinn Féin Assembly member for Upper Bann, John O'Dowd, said the Hamill family had been consistent in seeking the establishment of an independent public inquiry into the brutal murder of the young man.

"The failure of the RUC to protect Robert from a loyalist mob, and that force's failure to conduct even the most basic investigation into all the events of that fatal night and those events subsequent to that night, need to very clearly examined," he said. "The Hamill inquiry team would do well to look at the issues which emerged during the Stephen Lawrence Inquiry, as the similarity in the circumstances, and in terms of failure by police to properly investigate these murders, remains very stark."

An inquiry, also ordered by Cory, into the killing of Lurgan solicitor Rosemary Nelson, opened in Craigavon last month before being adjourned.

Meanwhile, County Louth Coroner Ronan Maguire is due to hold a preliminary hearing into the 1976 death of Séamus Ludlow, a forestry worker. Ludlow, a 47-year-old bachelor, was abducted on his way home by a loyalist gang and shot three times before being dumped in a laneway north of Dundalk.

Initially, the Gardaí attempted to blame the IRA for the killing but compelling evidence later emerged linking the death with the loyalist Red Hand Commando.

Ludlow's family have been campaigning for a full public inquiry into his death amid concerns about the joint Garda/RUC murder investigation.