All mandates must be respected 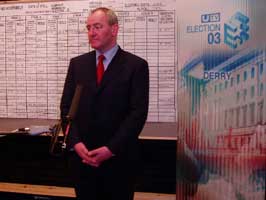 Ever since Sinn Féin entered electoral politics, we have been lectured on the principles of democracy by the two governments and all of the other parties on this island. At every juncture in the Peace Process, it has been stated mainly by unionists but acquiesced to by the governments and the other parties, that they will only co-operate with democratic parties, as if they had the copyright on democracy. It is a common belief that it was only unionists who discriminated against their political opponents, but a closer inspection of the SDLP in the North and all of the parties in the South will demonstrate differently.

Since Sinn Féin first entered local councils, unionists berated, insulted and attacked our elected representatives in the council chambers, while unionist paramilitaries murdered them outside. But what is not so well documented is the role of the SDLP. Where it was in control of councils or where their numbers combined with Ulster Unionists had control, Sinn Féin was also frozen out of influential positions and systematically discriminated against. In the South, all of the other parties on many of the councils formed political pacts in order to keep Sinn Féin out of influential positions. Donegal County Council is a perfect example of this practice.

Only when Sinn Féin's electoral strength increased, posing a threat to SDLP and Ulster Unionist control of councils in the North, did the SDLP embrace the d'Hondt system of power sharing. This was not done in the interests of democracy but for self-preservation in case Sinn Féin took control of councils and was in a position to turn the tables. Similar patterns occurred in the South.

While over the period since the recent elections the SDLP has been highlighting the lack of power sharing in unionist-dominated Lisburn and Castlereagh Councils, no one was paying any notice to the practice of the SDLP for the last 30-odd years where it dominated and excluded Sinn Féin from chairs and deputy chairs of councils.

This week, following another increase in the Sinn Féin vote, the SDLP in Down Council was finally forced to accept the d'Hondt system of rotating senior positions for the first time. Up until now, the SDLP and the UUP rotated the top positions between them and as recently as last week, the SDLP's Eamon O'Neill insisted that they had no intention of changing this practice. But just like unionists, they only adopted democratic measures when they realised that their dominance was threatened by the onward march of Sinn Féin, now the second largest party on Down Council.

In Derry City Council, the same system was practiced by the SDLP and unionists to exclude Sinn Féin from the position of mayor and deputy mayor until the Sinn Féin group increased to the position that it was threatening the dominance of those parties on the council. Then, and only then, did the SDLP look to institutionalise power sharing in Derry City Council to ensure that no party could ever discriminate against the SDLP.

It was only in the year 2000-2001 that Councillor Cathal Crumley became the first Sinn Féin Mayor of Derry. But thankfully now, the last bastion of SDLP dominance has been broken and Down Council, due to the increased political strength of Sinn Féin, has now introduced d'Hondt.

I would urge the SDLP to learn from their own experience of having to share power when they were threatened with losing it altogether. The same logic can be applied to the DUP. I believe that by adopting a cooperative approach to negotiations and applying the weight of our joint mandates, the DUP can be convinced that in order for it to exercise power here it will have to do so in partnership with republicans and nationalists or lose it forever.

We need to use our combined strength to convince the two governments to impress on the DUP that if it continues to block progress and the full implementation of the Good Friday Agreement then the governments will take joint responsibility and share power as co-equal partners in an International Treaty.

The DUP needs to get real. Its proposal that the Assembly should be re-established as some sort of super scrutiny committee is unacceptable. The people voted for a fully functioning Assembly with Executive powers and all-Ireland institutions. They deserve nothing less and that is where Sinn Féin is putting its energies — towards having the political institutions up and working and ensuring that the Good Friday Agreement is implemented in full. I call on the SDLP to support us in our efforts.

A super scrutiny committee is a non-runner. Ian Paisley needs to know that the only way he is going to be able to exercise his mandate in an Assembly is in partnership with Sinn Féin and the other parties that have received sufficient mandate to be part of the Executive. He needs to be told so in no uncertain terms and in one voice by Sinn Féin, the SDLP, all of the other pro-Agreement parties and the two governments.

The DUP needs to be reminded that although it may speak for the majority of unionists, it still represents only a minority of the people of the North and an even smaller minority of the people of Ireland as a whole, who voted overwhelmingly for the Good Friday Agreement. This is not just a Six-County Agreement; it is an all-Ireland Agreement and I welcome an Taoiseach Bertie Ahern's assurance that it will not be renegotiated.

Ian Paisley and the DUP should stop their stalling and respect the will of the people. The DUP received a substantial mandate. But so did Sinn Féin. We respect the rights of those who voted for the DUP and we expect the DUP to respect the rights of those who voted Sinn Féin. On that basis we should get on with what the people voted for, get the political institutions up and working and reverse the damage that Direct Rule Ministers have done to our economy and to our infrastructure through swingeing cuts to our education system, the imposition of water taxes, etc.

But in the meantime we must continue to make progress and introducing more preconditions serves no purpose whatsoever, especially when everyone knows that eventually we will have to put our political differences aside and work together.

Sinn Féin is ready to do business with the DUP, the UUP, SDLP and others purely on the basis of our mandates. The DUP has the mandate to represent the majority of unionism but does it possess the confidence and courage to exercise that mandate based on the equal democratic legitimacy of our respective votes?