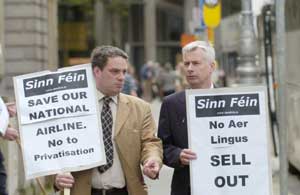 Sinn Féin this week has sued its private members time to allow TDs in the Dáil to debate the proposed privatisation of Aer Lingus, the national airline.

He said: "It has been amply demonstrated in the cases of Eircom and now the ESB that privatisation leads to higher costs, increased prices and a complete absence of the promised benefits of competition."

Crowe highlighted the fact that while Eircom chiefs paid themselves handsome dividends of €500 million through what he described as "innovative ways", the company needed over a billion euro invested in it to update its infrastructure. He said: "This is the reality of the privatisation of Eircom. A lucky few have been enriched while the original infrastructure is in decay."

Addressing the issue of Aer Lingus itself, Crowe said the airline exists in the first place because "there were no private-sector investors willing to take the risk in setting up the company" at the time. "There was no one with the long-term strategic view of how important the airline industry would become to the Irish economy, in terms of not just tourism but importing and exporting goods."

As a result, he said, "Aer Lingus became a vital part of the economic infrastructure of the State, which it still is today".

Rejecting the notion that the state cannot invest in Aer Lingus, Crowe pointed to the "disclosure that €27 million of our taxpayers' money has been invested in airlines around the world through the pension reserve fund". He said: "So, it's ok to invest in Air France, BA or even Ryanair, but not our national airline."

Cautioning against rejecting the motion, Crowe warned: "Unless you support this motion, we will have instead the quick sell off, the glossy ad campaign, but no real thinking about the long term. So get ready for another bumpy ride, lots of turbulence, jobs lost and ultimately a crash landing."

Louth Sinn Féin TD Arthur Morgan described the decision to privatise as "scandalous". He too emphasised that the decision "has the ability to seriously undermine the long-term strategic interests of this state" and is "a slap in the face to the employees who are working to restructure the company to sustain growth and profitability".

Morgan also questioned the Minister for Transport after reports that there is a €243 million deficit in the company's pension scheme.

"I understand that this was never signalled to the Aer Lingus unions and that they received an assurance from Willie Walsh that all was well with the pension fund," he told the Dáil. "What happens to pension entitlements in the event of privatisation if there is this level of debt?" he asked.

"I ask the Minister for Transport to clarify what exactly is the status of the pension fund, if and when the government intends to set up a separate Aer Lingus pension fund and how such a pension fund will be financed.

"This state should be very proud of our national airline and should realise what an asset it is to the country," he concluded. "Once we lose control of the national carrier there is no guarantee that in an economic decline any airline would continue to serve the state if they deemed that it was not profitable to do so.

"Sinn Féin will continue to fully oppose all plans to privatise Aer Lingus, which in the common good must remain in public ownership."

The motion, signed by the five Sinn Féin TDs, reads:

Recognising the enormous contribution to the Irish economy made by the national airline, Aer Lingus, since its establishment;

Commending the workforce in Aer Lingus for building up the company over many years as one of the foremost airlines globally, and for their major contribution in returning the company to record profitability since 2001;

Noting that State funds, through the National Pensions Reserve Fund, are currently being invested in aviation companies throughout the world, while the Government refuses to invest State funds in Aer Lingus;

Affirming the need to retain the national airline in public ownership as a vital strategic element of Ireland's infrastructure;

Asserting the responsibility of the Oireachtas to serve the public interest, including the convenience and safety of the travelling public and the livelihoods of workers in the national airline;

Deplores the decision of the Government to sell the majority stake in Aer Lingus held by the State on behalf of the Irish people, thus leaving the company and the workforce open to exploitation by private commercial interests who will profit from the decades of investment by the State in building up Aer Lingus and from the sacrifices of the workforce who saved the company in recent years;

Calls on the Government to:

Invest in Aer Lingus as required and on the basis of a business plan to secure the future of the airline, given that there is no impediment under EU competition rules to such investment;

Safeguard the employment, pay and conditions of all Aer Lingus workers;

Develop Dublin, Cork and Shannon Airports and the regional airports as part of an integrated all-Ireland transport policy, and in doing so fully comply with the agreement reached between the Taoiseach and the Irish Congress of Trade Unions in the context of the 2004 pay talks so as to ensure that pay and conditions won by workers at Dublin Airport are fully applicable to workers in the new terminal or terminals there.

1 The state can invest in Aer Lingus as a legitimate shareholder on a commercial basis without taking the privatisation option and without breaching current EU legislation. The taxpayer is already funding other airlines, including BA, Air France and even €7 million in Ryanair, through the National Pension Reserve Fund.

2 There is no strategic plan for the future of Aer Lingus. The important questions of how the company will develop, what type of business it will focus on, what type of planes, what routes, have not been answered, despite a commitment more than a year ago to formulate a strategy.

3 Ireland has much more direct flights than other comparable states because of Aer Lingus. If Aer Lingus is privatised, it is highly likely that the new owners, BA for example, would make their home airports the hub, relegating Cork, Dublin and Shannon to regional airports. Are you really ready to have to make your connections through Heathrow to fly to the USA, or Europe?

4 Jobs will go and wages will fall. Look at the case of Irish Shipping, which collapsed in the 1980s. The government moved to sell off some of Irish Shipping's profitable subsidiaries, including Irish Continental Lines in 1984 and B&I in 1992. Both companies are now part of Irish Ferries, which last year moved to register one of it ferries outside of the EU to avoid EU and Irish labour laws and this year was found to paying one of its ferry workers as little as €1 an hour.

5 We need a national airline that plays a dynamic role in the national economy. As an exporting and importing nation we need an airline that will play a role in the island economy. The former management at Aer Lingus were aiming to be a Ryanair II, with no cargo, no strategic view, which will give short term profits but in the long term will be damaging for the Irish economy.

6 Look at the case of Eircom. Floated on the stock market, sold to a consortium who asset stripped it, paid themselves a €500 million dividend based on borrowing, refused to invest in a national broadband rollout, and need to invest at least €1 billion in upgrading their network. What do the consortium do? Sell it back to the stock exchange and jump ship.

7 ESB is being made ready for privatisation and this has meant a 40% increase in electricity prices over the past four years, to make the company attractive for the private sector.

8 Look at the British example of the rail industry. Privatisation and cost cutting has led to tragic accidents and huge loss of life. Trains are dirty, late and often break down. Last year, though, the Tube Lines consortium which runs a third of the London Underground still made a profit of £100,000 a day, paying its chief executive a six-figure bonus, even though they consistently failed to meet targets for trains running on time.

9 We need an all-Ireland vision for the airline and airport sectors. We need to build a strategy that develops air services, airports and complimentary facilities across the island, whether it is in Donegal or Dublin, Belfast or Cork. Selling off Aer Lingus will be a major blow to such a strategy.

10 Aer Lingus is the airline of choice for Irish people, safe, well run, with good customer relations, it is a symbol of what can be good about the Irish economy and there is incredible goodwill from the people towards this airline. Do we want to squander this?

Governments have been selling off state-owned companies for nearly 15 years now. Below, we give a list of the money received from the sell off in 2004 prices. The data comes from Paul Sweeney's excellent book, Selling Out, Privatisation in Ireland. Sweeney's figures are derived from Department of Finance data. It accumulates to near €10 billion, even though B&I and Irish Steel were effectively given away, and the real value of these companies was never fully known.