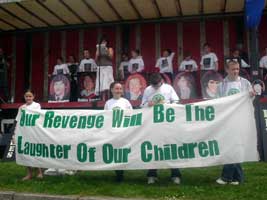 Last Sunday, thousands of people gathered in West Belfast to celebrate the legacy of republican resistance embodied by the 1981 Hunger Strike and pay tribute to the ten brave young men who died in Long Kesh rather than accept the criminalisation of their struggle for Irish freedom.

Led by a smartly turned out colour party and the Felons pipe band, a row of smiling children carrying placards bearing pictures of the H-Block Martyrs and of Michael Gaughan and Frank Stagg — both of whom died on hunger strike in English prisons — the parade made its way down the Falls Road to Dunville Park.

Behind them, a larger group of young people proudly sported 'Spirit of Freedom' t-shirts bearing the phrase made famous by the late Bobby Sands: "Our revenge will be the laughter of our children."

The remainder of the large crowd made their way down the road behind West Belfast's Éire Nua flute band, who were also in brilliant form. In Dunville Park, young people released doves to symbolise the spirit of republican freedom and Sinn Féin's Francie Brolly sang the Hunger Strike song, I'll Wear No Convict's Uniform.

Those present were treated to even more great music as the afternoon progressed — including the Turkish hunger strike song performed by Pól Mac Adaim and the Ballad of Joe McDonnell. As children played and enjoyed ice cream in the sunshine, their parents listened while the guest speakers — Sinn Féin's Mary Nelis and Gerry Kelly, Ogra's Andrea O'Kane, and Enda McElwee, sister of Thomas McElwee — spoke of the strength and courage of the ten H-Block Martyrs and their families.

"We are gathered here today to honour the memory of those who died 24 years ago on hunger strike in Long Kesh," Nelis told the crowd. "They are now as they were then, republican freedom fighters, men who gave their lives for the cause of the Republic and for the love of their fellow prisoners.

"We have carved their names with pride along with the names of Thomas Ashe, Tomás McCurtain, Frank Stagg, Micheal Gaughan and all who died a lonely and painful death by hunger strike. And while we remember them, we also remember and pay tribute to their relatives — their mothers and fathers, their wives and children and family members. For they too suffered, and we can only imagine the pain and sorrow they endured during those terrible years.

"The years 1980 and 1981 will be remembered with great sorrow, but they will also be remembered as the defining moment for republicans in this phase of our struggle. The British knew that if they could break the Hunger Strike they could break the struggle. But it didn't work then and it will not work now — not while the graves of our dead and the memory of their sacrifice continue to inspire us."

Turning her attention to recent events in the 26 Counties, Nelis made no effort to conceal her contempt for certain Irish politicians.

"What about O'Dea," she asked, "whose face looks like a brush turned inside out each time he says the words Sinn Féin?

"And what of Michael McDowell?" she continued as the crowd roared approval. "The Minister for Justice is so busy criminalising republicans that he has allowed that place he presides over to become like Chicago during the Al Capone era.

"Alas for poor Willie and Michael and the rest of the Free State Quislings, republicans are still here. And we will still be here when they are not.

"The best tribute we can pay the memory of the Hunger Strikers is to fight the attempts to criminalise our struggle. So let's take on McDowell and O'Dea and all those who think they have us beat. Join Sinn Féin. Take to the streets and protest. Celebrate republicanism. Be proud of who and what we are. And let's get into them!"

Gerry Kelly, the main speaker of the day, told the assembled audience that Sinn Féin will not allow plans for power-sharing to be thwarted, despite the recent electoral gains of the DUP. He too, spoke pointedly about the blatant and self-serving political opportunism displayed by southern politicians.

"Never since the Thatcher regime have I witnessed such an onslaught from the establishment attempting to criminalise our republican past and present," he said. "The difference this time is that the front runners in this opportunistic propaganda drive have included leading members of the SDLP as well as Dublin Government Ministers like Michael McDowell and Dermot and Bertie Ahern.