In search of Blair's legacy 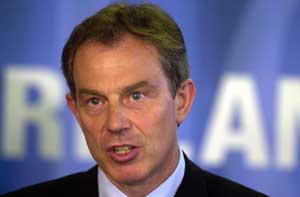 If Tony Blair was, as he was said to have been, shaken by the result of the British general election, in which only slightly over one third of the electorate, 36%, actually voted for him and which saw Labour's majority reduced from 160 to 67 seats, it was not apparent on Tuesday in the Houses of Parliament.

So much for "listening and learning" to what the public had to say. Under the media-friendly alliterative agenda of "reform and respect", the queen's speech laid out 45 new bills to be passed in the forthcoming parliament, most of them utterly ignoring the concerns expressed by traditional Labour voters and the reasons why so many deserted the party on 5 May.

There are to be more attacks of civil liberties in the form of additional counter-terrorism bills, creating a raft of new offences from acts preparatory to terrorism to 'condoning' terrorism (it will be fascinating to see how the police and judiciary interpret that one). Further privatisation measures will be introduced into the NHS under the guise of "choice" — disregarding the fact that one of the key factors in the rise of MRSA in hospitals has been the contracting out of cleaning to profit-driven private companies. The extreme right will also be indulged, with new legislation on asylum and immigration, including provisions under which even successful asylum seekers will only be given leave to stay for five years, rather than permanently.

This is all aimed, according to Geoff Hoon, to help foster a culture of respect for other people and for the law, particularly amongst the young. This coming from a government which did not, does not, respect the wishes of its people in going into an illegal war and occupation at the cost of 100,000 lives.

But however bold and dynamic he imagines his programme for government to be, Tony Blair is a worn out leader living on borrowed time. Labour won the election despite him, not because of him, and much of his party and the public do not want him to stay in office. Of those who voted for him, many did so resentfully, through gritted teeth and because of the paucity of choice of alternative. The Lib Dems might have made much of their opposition to the war but others remembered how they waited until it was politically safe to oppose it before doing so, and then adopted a policy of supporting 'our boys' in Iraq whilst denouncing the decision to send them there. It brought them Labour votes certainly, particularly from the young, and significant gains such as Cambridge on a 15% swing away from Labour, but it also succeeded in allowing the Conservatives to gain extra seats without increasing their share of the vote.

Where Labour voters could severely punish the party without risking putting in a Tory, they did so with relish. In Bethnal Green & Bow, the sitting Labour MP Oonah King forgot the golden rule that the first obligation of an MP is to her constituents. Her devotion to Tony Blair and support for the war, despite having been elected by Muslim voters passionately opposed to it, cost her her seat. In a rancorous campaign, she lost to George Galloway of the anti-war Respect party. He of course, had been expelled from Labour for saying that Blair and Bush had fallen on Iraq like "a pack of wolves".

Galloway was also the subject of the single most stupid, insulting and anti-feminist question ever put to a politician when, on election night, Jeremy Paxman asked him if he was proud of having unseated one of the only black women MPs in the country.

The smaller parties had mixed fortunes. Respect, of course, scored their one spectacular victory and in George Galloway they have an MP who is certain to maintain a high profile for both himself and the party.

Mercifully, the far right could claim no such victories; the BNP, the UK Independence Party and Robert Kilroy-Silk's vanity project, Veritas, all failed to gain a seat, despite claims from all three that this election would provide them with a breakthrough result.

In Scotland, the Scottish Nationalist Party picked up an extra two seats, giving them a total of six, but still ended up in third place after the Labour and the Lib Dems. The Scottish Socialist Party had a bad election, seeing their vote fall to 1.9% from 3.1%. Party members did, however, succeed in confronting the BNP during the count in Glasgow when the police were obliged to intervene in heated exchanges between the two parties to prevent things getting out of hand.

Since 1997, Wales had been able to pride itself on being an entirely Tory-free zone. Not any more, as the Conservatives won three seats. Labour lost five seats, including Blaenau Gwent, its safest seat in Wales, after former Labour member Peter Law stood as an independent in protest at the imposition of a women-only shortlist and overturned a 19,000 majority. Surprisingly, Plaid Cymru faired poorly, losing the Ceredigion seat of the talented Simon Thomas, the party's director of policy, to the Lib Dems by just 200 votes, and leaving it with just three seats.

With the election result out of the way, attention will now turn to the leadership battle. And also who will take over from Michael Howard. Some, including Howard, are suggesting that if Labour backbenchers have their way, Blair will be gone before he is but that seems unlikely. Blair insists he will serve his full term, again unlikely, but what he is trying to do is secure his place in history and he will hang on, however unpopular he may be, until he feels he has done so.

This near-obsession with his legacy has made Tony Blair the personal embodiment of the long-held desire of the British political and military establishment to rewrite history and present itself to the world as the force which solved the Irish problem for the Irish people; that the British state went into a pre-existing, sectarian conflict, sorted it out for the Irish when they were incapable of doing so themselves and then left with honour. This self-deception apart, Blair does actually have a chance to leave office having done some permanent good in Ireland; the question is, will he take it?