The day they burned the Custom House - Remembering the Past 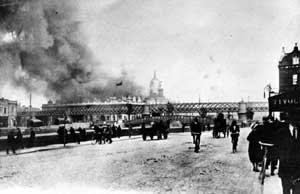 When Dick McKee was murdered on Bloody Sunday 1920 in Dublin Castle, Oscar Traynor became OC of the Dublin Brigade of the IRA. In the early months of 1921 he was called to a meeting by the senior members of the Republican Movement. The meeting was held in 40 Herbert Park, the home of The O Rahilly's widow. Amongst those attending the meeting were Cathal Brugha (Minister of Defence), Michael Collins (Intelligence), Liam Mellows (Purchase) and Seán Russell (Munitions).

During the meeting, Eamon de Valera arrived, having passed through a British military cordon that had been placed around Herbert Park. At the meeting, Dev proposed a major operation, which he felt was vital to bring Ireland's struggle for independence to the world stage. He proposed either the seizure of Beggars Bush Barracks (headquarters of the detested Auxiliaries) or the destruction of the Custom House.

The latter was the then administrative heart of British rule in Ireland and housed the entire local government archives and more importantly, all the tax files for Ireland.

Traynor was ordered to study the feasibility of the two operations and quickly concluded that the attack on the Custom House was more within the capacity of the Dublin Brigade.

Traynor and Tom Ennis, his second in command, began planning the operation over the next three months.

Both of them used the simple ruse of walking through the Custom House with large OHMS (On His Majesty's Service) envelopes as a cover for their surveillance.

The final plans of the IRA's largest operation ever were agreed to by a sub-committee of the Army Council at a meeting held on 21 May in 6 Gardiner Row. At the meeting, Traynor sought permission for 50 barricades, covered by snipers, near all military barracks in the city. Michael Collins vetoed this part of the plan, as he thought that this would look like general insurrection. Traynor felt that this was an absolute requirement for his men's safe extraction but he accepted Collins' revised plan.

The 5th Battalion was charged with the task of cutting all communications from the Custom House with the outside world, including the direct line from it to Dublin Castle. The Active Service Unit of the Dublin Brigade, known as The Squad, was given the task of occupying the main hall and making sure no civilian personnel left the building until the paraffin had done its work.

At 12.55pm on 25 May, the Volunteers of the Dublin Brigade went into action. They entered the building in twos and threes so as not to attract attention. All civil service employees were rounded up and brought to the main hall, where they were guarded by the Squad.

The Volunteers then began dousing the interior with paraffin. The 5th Battalion scaled telegraph poles and climbed into manholes to cut the telephone wires. The 3rd Battalion seized Tara Street fire station and as evidence of the fire emerged, Volunteers staffing the phone line told callers that help was on its way.

The Volunteers continued in a very methodical manner to saturate the labyrinth of offices with paraffin and awaited the two whistle blasts that was their signal to withdraw. Unfortunately, a premature blast was heard, which caused some confusion, and by the time order had been re-established the Black and Tans had arrived on the scene.

A savage gun battle broke out in which Volunteers Paddy O'Reilly, his brother Stephen, Seán Doyle, Sean Head and Tommy Dorrins were killed in action. All five men were from the North Inner City of Dublin, which was the catchment area of the 2nd Battalion.

Following the operation, the pro-British press made much of the destruction of their fine building. The Irish Times called the operation "senseless and wanton", while the London Morning Post wrote that the Volunteers were "not a patriotic party but Bolsheviks" and that "to talk of negotiating with such criminals is in itself a crime".

The Government of the Republic responded to these allegations of criminality in the Irish Bulletin, where Erskine Childers wrote that although it regretted the destruction of an historic building, "the lives of four million people were more sacred a charge than any architectural Masterpiece".

One month after the destruction of the Custom House, Loyd George began negotiations with Dev for a truce, which began on 11 July 1921.

Despite heavy losses of personnel (up to 100 were captured) the operation was a complete success. One of the tools of tyranny, with all its bureaucratic contents, had been destroyed. England had been dealt a blow to its financial stranglehold on Ireland from which it was never to recover.

On 25 May 1921, 84 years ago, the Dublin Brigade of the IRA carried out its largest operation to date.