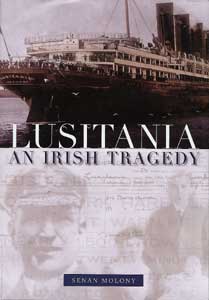 There are two types of people in this world — those who are cursed with morbid curiosity and those who aren't. If you have always been interested in, say, the Titanic or the Hindenburg, then you fall into the first category and this book may appeal to you.

The sinking of the Cunard Liner the Lusitania, by a German submarine on 7 May 1915, is one of the greatest maritime disasters of all time. The British passenger liner was on its home leg from America when it was hit by a German torpedo within site of the old lighthouse at Kinsale, on the Cork coast. In a few hours, 1,195 lives had been lost. The event was used as a massive propaganda tool by Britain to recruit during the First World War, with 'Avenge the Lusitania' featuring on many of the army's leaflets.

The story surrounding the ship is fascinating. One of the biggest liners of the time, the Lusitania took only 18 minutes to go down. The Titanic, sunk three years earlier, managed to stay afloat for two hours after having 250 feet of its hull torn by an iceberg. This anomaly immediately led to speculation that the Lusitania may have been carrying more than just civilian passengers. In defiance of maritime law, many claimed the luxury liner at the time it was hit was being employed to carry explosives purchased in America for use by the allies. This would have explained the massive blast, far in excess of that a torpedo would make, that sank the ship.

Some theorists went further, to suggest that Britain had actually wanted the ship sunk. 123 Americans died as a result, and it was thought that this would bring the US into the war. In fact, even now, the Irish leaving certificate syllabus cites the sinking as doing just that.

Whether Britain did indeed have the misconceived notion that this would drag the US in as an ally — this didn't happen. Americans were up in arms about their fellow citizens being killed as a result of the European war, but with Irish and German American citizens outnumbering British Americans, the sinking of a British ship was never going to be the spark that ignited the American war cry.

Despite harsh words to the Germans, America didn't actually join the allies until 1917.

This political intrigue is for the most part glazed over by Senan Molony.

On the positive side, he does initially look at the anti-German feeling in Ireland that was cultivated by the British following the event, and how that feeling was turned to anti-Sinn Féin sentiment (Irish republicans at the time intermittently received aid from the Germans — in fact the U-boat commander that brought Roger Casement to Bana Strand in 1916, Raimund Weisbach, was the same commander who fired the torpedo that sunk the Lusitania).

The thrust of Molony's book, as he says himself, picks up the narrative from the sinking, telling the stories of the survivors, the dead and the rescuers.

Had he stuck with the thread of his introduction, that of looking at the political context of the sinking, this book might have been more interesting. However, after the preliminaries, we are treated to over 70 pages of blow-by-blow accounts of the many Irish who died in the icy waters off the Cork coast and of those who managed to survive. Accompanying these gloomy stories are photos of the dead, including the odd drowned child. It's not for the faint-hearted.

To top it all off, much of this section of the book is made up of old newspaper reports. All credit must go to Molony for being a talented researcher, but reading 70 pages of newspaper clippings is just a tad tedious.

The rest of the book is more readable; in fact, the section on 'Legacy and Memory' is worthy of note, detailing as it does the Dublin Government's typical refusal to erect a proper memorial to the victims of the tragedy. Council politics and a refusal to spend money were, of course, the usual suspects.

If you are interested in reading about the Lusitania, I would only recommend this book in conjunction with Exploring the Lusitania by Robert D Ballard (Madison Press, 1995).

Reading Ballard's book first will give you a slightly clearer picture of not only the ship's story, but of international politics at the time and after.

The two together make more sense than Molony's book on its own.