What about the others? 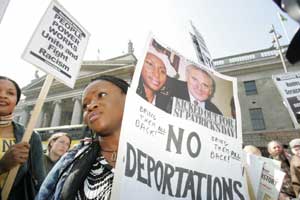 Several hundred people attended a demonstration in Dublin last Saturday 2 April, organised by Residents Against Racism, to mark Minister of Justice, Michael McDowell's climbdown over the deportation of a Nigerian student.

Olukunle Elukanlo, who was studying for his leaving certificate in Palmerstown Community College, was summarily deported last month, along with a planeload of Nigerian asylum seekers.

Elukanlo's school colleagues were appaled, as was the education establishment at their Easter union conferences. Under intense pressure, McDowell conceded that Elukanlo should be brought back. He returned last Friday to a tumultuous welcome by his friends and classmates.

It was a victory claimed by Education Minister Mary Hanafin at the teacher union conferences last week as a demonstration of the humane nature of the government's deportation policies. But neither minister mentioned the other asylum seekers, including Elizabeth and Iyabo, who were both deported on the same flight with Ekukanlo, who left children behind them and are now separated from them by Minister McDowell's 'humane' deportation policies.

Rosanna Flynn of Residents Against Racism, referring to the continual breaches of human rights, and the institutional racism of the Justice Department in its implementation of procedures, called for the removal of the asylum procedure from the remit of the Minister for Justice altogether, in favour of the Human Rights Commission.