Is an alternative government possible? 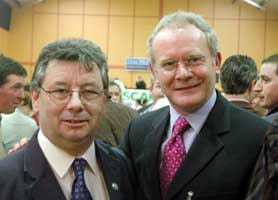 EOIN O BROIN is Sinn Féin's Director of European Affairs. He is writing in a personal capacity.

Now that the dust has settled on the results of the Meath and Kildare North by-elections, and the party political spin is replaced by honest, albeit private, analysis, some important questions need to be addressed.

The striking fact of the results, however you read them, is the resilience of both Fianna Fáil and Fine Gael. Clearly, Fianna Fáil suffered a loss, but what mid-term government doesn't. Likewise, Fine Gael's success, while not to be exaggerated, signals a recovery. In the final analysis, Catherine Murphy's dramatic success notwithstanding, no future coalition government is possible without the involvement of either Fianna Fail or Fine Gael.

Poverty, homelessness, public sector crises, racism and corruption have become the by words of Irish political life in a decade of unprecedented economic growth. Despite these facts, the main architects of such policies continue to command significant electoral support.

As politics become more distant from the lives and interests of ordinary people, a dangerous democratic deficit has opened up. The fact that only 40% of eligible voters bothered to turn out in the two by-elections is indicative of this trend.

Yet, despite widespread concern among a broad section of the people at the current direction of Irish political life, the main architects of the present political consensus, Fianna Fail and Fine Gael, remain the dominant players in the field.

Fine Gael and Labour made much of the success of their Mullingar Pact in Meath and Kildare North. Both Rabbitte and Kenny played up the prospects of an alternative administration in waiting. However, as ATGWU Regional Secretary Mick O'Reilly rightly points out in the Irish Times, the pact only benefits Fine Gael and relegates Labour to the position of 'also-rans'.

More significantly, despite the benefits for Fine Gael, the figures still don't add up to a working majority. Fianna Fail remains in poll position to contemplate future coalitions with the PDs, Labour or Sinn Féin. While the PDs' political future rests on such a deal, for Sinn Féin and Labour such a pact — inside or outside of government — contains more risks and contradictions than opportunities.

Even if the figures did add up, the question remains if such a rainbow coalition would really be that different from its predecessors? Could a Fine Gael-led coalition provide a meaningful policy alternative? Could a minority membership of Labour and Green TDs really shift the conservative policy direction of Fine Gael? The example of the Bruton led coalition does little to inspire.

And herein lies the dilemma for the political parties of the left. Sinn Féin, Labour and the Greens come nowhere close to a working electoral majority in the short term. Indeed, much of the strategic positioning of the Greens and Labour rests on joining the anti-Sinn Féin bandwagon, and hitching their hopes to a centre right coalition with Fine Gael.

The Greens' prevarication over the EU Constitution is an indication of the policy compromises involved in such a strategy, and the potential division that it could cause among party activists. Equally, Rabbitte's amnesia over the political establishment's criminalisation of the Workers' Party in the1980s contains its own risks, appeasing the centre at the expense of the left, and risking his own credibility in the process. And while Rabbitte has shied away from saying no to the possibility of a deal with Fianna Fail, his amnesia isn't so bad as to forget the consequences of such a move for Labour under Spring.

Sinn Féin, meanwhile, is left to contemplate the consequences of supporting a Fianna Fail minority government, with the inevitable trade off between Irish unity and an Ireland of equals. If the risks appear too great, the immediate alternative — impotence — offers little consolation.

The problem for all three parties of the left is a simple one. Two out of three unwilling to contemplate working with the other; all three focused on short term electoral growth; and all three working on the basis that a coalition with either Fianna Fail or Fine Gael is workable, at least in theory.

In every instance, no matter what benefits were derived from the coalition, in political or policy terms, the left republican, labour or green component always suffers, in some cases terminally.

Gerry Adams has argued that an alternative approach to coalition politics is required if the failed conservative consensus of Fine Gael and Fianna Fail is to be broken. He was indicating Sinn Féin's desire to be part of a different, left of centre consensus — one which placed Irish reunification, social and economic justice, protection of human rights and the environment and promotion of global justice at its heart. The clear implication was the building of a government coalition without the two dominant parties in the state, and led by Sinn Féin, Labour and the Greens.

Meath and North Kildare indicate that such a coalition could not, at present, secure the support of even 30% of the electorate. Building such a coalition would have to be a medium to long-term project. Indeed, it would need to be viewed as more than just an electoral project. It would require a strategic and ideological shift, not just for the parties involved, but also for a considerable section of the southern Irish electorate.

Such a coalition, if based on the currently stated programmes of the three parties, would, for the first time in the history of the Irish state, offer the electorate a clear choice between a left of centre government and the failed centre right policies of Fianna Fail and Fine Gael. Such a contest could do much to re-energise Irish political life, giving the electorate real choice, and real alternatives.

Set against the broader European and global context of growing popular dissatisfaction with the failures and inequalities of neo-liberalism, technocratic governance and corporate globalisation, such a coalition of progressive forces could capture and shape the public mood in an unprecedented way.

However, such a coalition will not happen by accident. It would need to be planned and strategically thought through. It would require investment and commitment by those involved. The animosity and distrust, which presently exist between all three players, would have to be overcome. Likewise for the gaps and differences in policy and political priorities. The thorniest issue of electoral competition would need to be addressed in ways that would allow all parties to grow but not at the expense of each other, a difficult but not impossible task.

If Sinn Féin is serious about such a possibility, then we need to take a lead role in starting now to build the space for such an alternative.

Despite the benefits being potentially greater than the obstacles, it is the problems that appear greater at present. However, if Sinn Féin is serious about building an alternative government to the present status quo, with Labour, the Greens and progressive independents, then we need to explain to the electorate what this means and how it can be achieved. We need to resist the temptation of being junior partners in a Fianna Fail-led administration, and dare to imagine that another form of government is actually possible.

While such an alternative may not be achievable in the short term, a greater degree of political co-operation between the parties of the left is. Each has a considerable amount of political strength inside and outside of Leinster House. Harnessing this strength and focusing it on a broader, more radical social and economic vision would in itself produce valuable dividends.

As Meath and North Kildare clearly indicate, settling for anything else will simply serve the interests of Fianna Fail, Fine Gael and the present conservative political consensus.