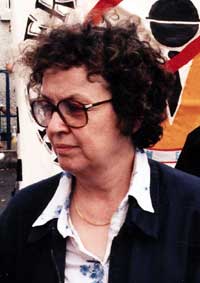 Ruth Dudley Edward's commentaries are full of inconsistencies and hyperbole, but as well as anti-republic rhetoric there is class hysteria

Noam Chomsky recounts a story told by Saint Augustine about a pirate captured by Alexander the Great. Alexander asked the pirate "how he dares molest the sea". "How dare you molest the whole world?" the pirate replied. "Because I do it with a little ship only, I am called a thief; you, doing it with a great navy, are called an Emperor." It is a tale of power and hypocrisy and for Chomsky, it exposes the dynamic of imperialist domination.

Over the last three months, contemporary Irish republicanism has been under enormous ideological pressure. It followed the collapse of negotiations before Christmas and began with the opportunity created by a multi-million-pound bank robbery in Belfast. The media blamed the IRA for the robbery on the basis of an opinion expressed by former London metropolitan police officer and current PSNI chief Hugh Orde.

In the weeks that followed, a cohesive anti-republican strategy began to emerge. It began with the British but it soon involved key power brokers within nationalist Ireland, Bertie Ahern, the Dublin Government and the Irish media. By St Patrick's Day it had spilt out into the political establishment within Irish America.

The strategy had intensified following a brutal killing involving a number of republicans after a pub brawl in the Short Strand. The IRA neither sanctioned the killing nor condoned it afterwards but these simple truths were easily obscured in the emotional intensity that followed the murder.

It began as a simple demand for justice by the victim's family, supported by their local community, but the fate of Robert McCartney soon became locked into a wider political strategy of damaging Sinn Féin by criminalising all republicans.

The basis of the strategy was exclusively ideological. Republicans were being vilified in the media, politicians were refusing to meet and talk to Sinn Féin but British soldiers weren't carting them off to internment camps or covert units shooting them dead.

Thirty years ago, the characterisation of Irish republicans as criminals and gangsters by the Thatcher regime had been the ideological smokescreen for brutal repression. Three decades later, it is a testament to Sinn Féin's political strength that repression has yet to emerge as a viable option.

All the British and partitionist elements within the Irish state appear to hope is to damage Sinn Féin's growing electoral strength in the south and, by utilising the grief of the McCartney family, damage Sinn Féin's core vote in the north. Of course, this would not be insignificant, given the enormous energy republicans have invested into building their electoral strength as part of the peace strategy of making politics work.

But while undermining Sinn Féin's vote might be possible, it is in no way inevitable or sustainable. The result of the Meath by-election, at the height of the media vilification campaign, as Joe Reilly increased the Sinn Féin vote, and the mass attendance at Easter Parades through the country this weekend suggests a certain resilience. Add to that the ability of republicans to find hostility motivational.

As a speaker during last year's West Belfast festival, media analysis Roy Greenslade highlighted two significant periods in which the British media had been out of step with British Government policy in relation to the North of Ireland.

The first was during the early civil rights movement. It emerged out of a period when the British media had completely ignored the North of Ireland for many years and before a clear ideological framework had been established by the British state.

English journalists arrived and reported what they saw. And what they saw was embattled working-class nationalist areas attacked by sectarian mobs backed up by a repressive one-party state. It took a while, but eventually those initial perceptions were superseded by an anti-nationalist, pro-unionist mindset more conducive to British occupation.

The second period identified by Greenslade is during the current peace process. Even at its height, Greenslade points out that a sizable section of the British press, and we could add a rump of Irish journalists, doggedly pursued their established diet of anti-republican rhetoric. It might be crap, but like Jamie Oliver's schoolchildren, they had been reared on turkey twizlers and they weren't going to give it up without a fight.

They refused to embrace the Peace Process because, for the reactionary right in both Britain and Ireland, the only 'peace' they sought was the defeat of the IRA. And if the subjugation of the nationalist community's aspirations of democracy and equality in the north was the price to be paid, they were prepared to let others pay it.

For some, peace means only stamping out opposition, silencing alternatives, standing firm. Negotiating, compromising, embracing change, resolving the causes of conflict, all this is anathema.

It is hardly a surprise that the advocates of this perspective, after years of being out of step with the Peace Process, have embraced the current criminalisation rhetoric like an old friend. Relief has been their main emotion; historical obscurity had beckoned but just in time they discovered they had been right all along. Their only question; why had taken so long for everyone else to realise it?

"How did the hard men of IRA mafia hoodwink so many decent people?" asks Ruth Dudley Edwards in the Irish Independent. Dudley Edwards poses a series of questions but less out of a genuine sense of inquiry and more as an opportunity to demonstrate she has all the answers.

"A university contemporary told me recently that he had never agreed with my views about the peace process, but that now I had been proven right," says RDE.

"How could a man like that," (RDE means middle class and educated) — "have been for so long so resistant to the truth?" The truth being what RDE had known all along, that republicans were nothing more than a bunch of brutal fascists (uneducated working class people who no longer know their place).

The "natural optimist", Tony Blair, the "fixer" Bertie Ahern and the charmer, Bill Clinton had all been hoodwinked because "modern Ministers have led soft lives" and therefore "they were not equipped to understand what they were up against".

RDE bemoans the passing of the old colonialist tradition of getting tough with the natives, those "earlier generations of British politicians, who had seen war and experienced suffering". They would have recognised "what kind of people they were dealing with".

But poor soft Blair, Bertie and Bill hadn't a chance pitched against the "hard, hard men" of the Republican Movement. But while war and suffering leads to clarity for the ruling elites, war and suffering for those destined to be ruled, only encourages their monstrous natures.

Republicans "who in many cases had suffered prison and injury and fear themselves" had "become brutalised in the process". And worse still, republicans had not only learnt to be brutal they had also learnt to be slick. Education and discipline, so beloved of the middle classes, is dangerous in the hands of working class people with aspirations. It allows them to "cover their hardness with soft words".

"Unlike normal politicians," (middle-class university educated) "these hard men had been turned into a model of discipline by paramilitary training — fluently producing weasel words, politically correct language and high flown peace babble," says RDE. Worse still, they became "fine propagandists" and "learned to use lawyers like guns. Critics were stifled by libel writs."

It's easy to poke fun at Ruth Dudley Edwards; her commentaries are full of inconsistencies and hyperbole but as well as anti-republican rhetoric there is another significant aspect to this discourse. RDE, like many other southern commentators, is also expressing class hysteria and this has played a significant role in the current ideological freefall in the South.

Gerry Adams has accused Bertie Ahern of placing party political interests above the interests of the Peace Process but more accurately, the southern state has stalled because it has perceived a threat to its status quo. The 26-County ruling elites are coming under political pressure from a working class party representing nationalist ghettos in the north and inner city poor in the south.

Republicans are being branded as fascists, totalitarian socialists (Stalinists) and are being compared to the Italian Mafia. These are all code words intended to alert members of power elites to republicans as their class enemy. It's a kind of political stranger danger message.

So have we moved into plan B? Making politics work for the middle classes.

Is the current anti-republican onslaught a desperate attempt to create the ideological space for the SDLP to emerge as a viable partner for the power brokers in the South and unionists within the North?

If this is B‚ then clearly our opponents are going to have an uphill struggle. The SDLP are already on life support and resuscitation can be a tricky business. Even within the current favourable anti-Sinn Féin climate, the SDLP has remained the invisible party while recent attempts to 'green' its history and image have been little more than a joke.

It has been difficult in recent weeks, even for republicans, to see their way through the current ideological onslaught. But like Alexander's captive, all we really need to do is look the powerful firmly in the eye and point out their hypocrisy.