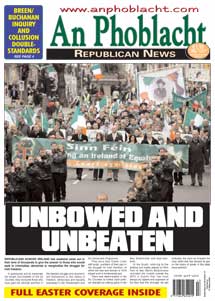 Republicans across Ireland last weekend came out in their tens of thousands to give the answer to those who would seek to criminalise, demonise or marginalise the struggle for Irish freedom.

In graveyards and at memorials the length and breadth of the 32 Counties, they honoured those who have paid the ultimate sacrifice in the freedom struggle and recommitted themselves to the ideals of freedom, democracy and equality expressed in the Proclamation and the Democratic Programme.

They wore their Easter Lilies with pride, confident of their part in the struggle for Irish freedom, of which the men and women of 1916 played such a fundamental part.

There was determination in the Six Counties to further build political strength by making gains in the May Westminster and local elections.

In the South, referring to the political and media attacks on Sinn Féin of late, Martin McGuinness reminded the crowds outside the GPO in Dublin that "we must always be vigilant and cognisant of the fact that the stronger we get politically, the more we threaten the cosy cartel that has abused its grip on the levers of power in this state since partition".

Full Easter coverage in Other News