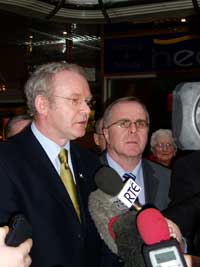 The Sinn Féin leadership is totally opposed to any return to conflict. It would have devastating consequences for all of us on this island. Our priority in the time ahead is to defend the Peace Process, to pursue the full implementation of the Good Friday Agreement and to uphold the integrity of Sinn Féin and the rights of our electorate, alongside the rights of all others. It is for the two governments to decide where their priorities lie.

This crisis began with the DUP's refusal to support last December's comprehensive agreement and to join in power-sharing government. No amount of mudslinging and false allegations can alter that fact. But for whatever reason the two governments chose to acquiesce in the DUP position and their confrontational approach to Irish republicans ever since is making a bad situation worse.

A charitable description of this approach by the British and Irish Governments‚ would be that they have misread the events of recent months, with the resulting damage to the Peace Process. But, unfortunately, I don't believe that to be the case. Bertie Ahern and Tony Blair are far too experienced politicians and negotiators for this to be a simple case of misreading a series of events that they didn't anticipate. I believe that both governments have acted very deliberately in the hope that they may inhibit or reverse the electoral growth of Sinn Féin. They saw the Northern Bank robbery as an opportunity to smear republicans, and deflect people's attention away from the mess they made of the negotiations pre-Christmas all in one fell swoop.

The simple explanation for Bertie Ahern's offensive and unfounded personal attacks on the collective leadership of Sinn Féin in recent weeks is that he knows that a strong Sinn Féin in the South will expose the real criminality in Irish politics. The criminality of political sleaze, the brown envelope culture, offshore accounts and tax evasion by the great and the good in Irish society that has cost the people of Ireland billions of euro in Tribunals and lost Revenue.

Bertie Ahern and the other political leaders in Dublin fear Sinn Féin's determination to give a voice to those who are disenchanted with the political system because of the corruption and 'cute hoorism' rife in the establishment parties. He also knows that a strong Sinn Féin will force him and the political establishment to once and for all address the core cause of political conflict in Ireland - Partition.

Tony Blair too fears the growth of Sinn Féin as a political power, not just in the North but as the only Irish national party on the island. He recognises that a growing Sinn Féin electoral mandate throughout the island signifies increased broad support for Irish reunification and a demand for British withdrawal from Ireland.

And make no mistake about it; Tony Blair is a unionist. Tony Blair's hope when he helped negotiate the Good Friday Agreement was that it would arrest the Sinn Féin vote, that the SDLP and the UUP would coalesce in a partnership of the centre and Northern nationalists would conform as obedient British subjects, thereby containing the Sinn Féin threat.

That's not what happened; in fact, the opposite occurred and nationalists and republicans recognised the Agreement as an opportunity to promote the benefits of all-Irelandism. Seeing the all-Ireland Ministerial Council, the Implementation Bodies and the areas of co-operation working, more and more people recognised the folly and waste of resources of having two of everything. Two economic systems, two currencies, two agriculture, education, health, infrastructure systems, etc, on a small island of just over 5 million people just didn't make sense.

The electorates, North and South bought into this analysis promoted by Sinn Féin and endorsed it at the ballot box. Irish unity was now firmly on the agenda and a vehicle to achieve it peacefully was available in the Good Friday Agreement. Rather than the Agreement securing the Union, as Tony Blair and the unionists believed, it actually increased support for Irish Unity and independence.

Sinn Féin was seen as the only party capable of driving that agenda. That is why the British Government — as its Chief Spymaster Joe Pilling and the British Secretary of State said publicly in the United States — is intent on stopping Sinn Féin becoming the largest party in the North.

But I detect a realisation by the governments that the confrontational approach that they have adopted towards Sinn Féin since Ian Paisley scuppered the chances for agreement last December will not work and could even backfire. Mitchel McLaughlin and I met with the Irish Minister for Foreign Affairs, Dermot Ahern, in Derry on Friday and I have to say that it was a very cordial but forthright meeting. I came away from that meeting with the clear impression that the governments wish to reflect on how their approach is digressing from their stated aim to see the full implementation of the Agreement. So I hope that cooler heads will prevail in the coming days and we can leave all the distractions aside and concentrate on getting the Process back on track.

I have no doubt that the truth about the bank robbery in Belfast in December will eventually emerge and I have made my position on this matter crystal clear. Sinn Féin has no intentions of allowing those who wish to use that event as an excuse to stall the process or use it as an attention-seeking device to succeed. Whether it is this side of the Westminster election or following it this Peace Process has got to be put back together again. A lot of damage has been done and it will take a collective effort to repair it but repair it we must. The assertion by the two governments that the IRA is the only obstacle will only succeed in delaying progress and is downright dishonest. I believe progress will not be made unless and until the British Prime Minister, Tony Blair and Taoiseach, Bertie Ahern accept that unionist opposition to sharing power with nationalists and republicans and their opposition to all-Ireland institutions lies at the heart of our difficulties at this time.