The New Labour approach to Education, Employment and Learning 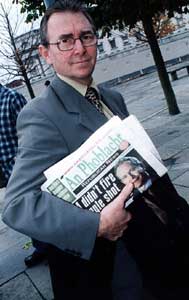 British Government proposals in relation to those in receipt of Incapacity benefit/Disability Benefit in the Six Counties need to be seen for what they are, not for what the Government would have us believe, writes MICHAEL FERGUSON, Sinn Féin Assembly spokesperson for Employment & Learning.

Minister Barry Gardiner MP has informed us that 29.2% of the population, or three out of every ten adults, are economically inactive, which amounts to approximately 500,000, half-a-million people.

This information is set against a backdrop of a skills deficit affecting between 20-27% of the population, who exhibit numeracy and literacy difficulties and a target that the government has set itself which aims to reduce this skills deficit by 12% over the next three years. In addition, the Government has also set itself a target of establishing 2,500 Extended Schools by 2008.

In this context, the government announces that it will 'increase' educational spending over the next three years to an amount that is no more than the total investment for the last financial year. This illusion of investment is complemented by what are called 'efficiency savings', that end Learndirect and Worktrack Training programmes and run the risk of destroying a training network and infrastructure that is best placed to address the skills deficit. This strategic move is complemented by the return of £50 million of an underspend to the Treasury while the five Education and Library Boards are under-resourced by approximately £25 million per year, leaving services from special needs to school meals at risk.

Learndirect was established with considerable fanfare across the 26 District Council areas, with huge investment in premises and staff. The programme to support an E-Learning Strategy was to be mainstreamed and offered in conjunction with a tutor, allowed those with numeracy and literacy difficulties an opportunity to get rid of their 'Gremlins'. It also offered the employed an opportunity to up-skill, allowed for backfill employment opportunities and for learners to develop at their own pace and near their own place.

Worktrack was a voluntary wage-based employment opportunity that matched the unemployed person with the right job, while building in the appropriate training. New Deal, a compulsory programme, has had an 8% employment success rate, Jobskills 13%, compared with Worktrack's 40% success rate across the Six Counties.

This is the Educational and Learning landscape which at one end of the horizon is facilitating a collapse in Early Years Provision as the European Cup of Human kindness dries up and senior management teams struggle to meet the requirements of a widening curriculum without additional investment. At the other end of the horizon, potential undergraduates from low and middle income backgrounds will question the logic of incurring debts that look like mortgages.

This is a Government with all the rhetoric of change but none of the substance of equality. The reality is that there is no investment to support an integrated and seamless educational process from childcare provision through a new post-14 curriculum onto skills targets and higher education, because the government will not tax those who can pay. The 'consultations' around FE, HE, Skills and of course Common Funding, Budget and Strategic Investment, were smokescreen cover for disinvestment.

There is for this British Government an acceptable level of unemployment and new proposals in relation to those in receipt of Incapacity Benefit/ Disability Benefit, are about clawing money back from the poor, forcing people into low paid jobs with equally poor conditions, rather than taxing the rich.

I suppose the "re-direction of investment into frontline services" the Minister is talking about are in England, because that is where the Labour Government core funds Sure Start Programmes, invests in New TSN and gives three times as much to Worktrack programmes. But rumour has it that every GP Surgery here will get an Actively Seeking 'Work' Personal Advisor for the Incapacitated and Disabled when they arrive for Sick Lines. Equality at last?