Sinn Féin is up for the fight 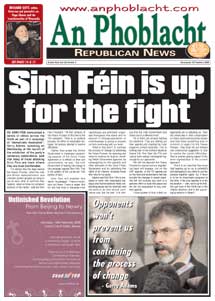 As Sinn Féin announced a series of rallies across the North as part of a campaign of "democratic resistance", Gerry Adams, speaking on Wednesday at the launch of the exhibition of the party's centenary celebrations, said that many of those attacking Sinn Féin are back where they are most comfortable.

"It's almost like the days before the Peace Process, when the Irish and British establishments and unionists parties ganged up trying to out do each other in anti-Sinn Féin hysteria, aided at times by compliant sections of the media," said the Sinn Féin President. "All that remains of the Peace Process at this time is the IRA cessation. There is no political process. No effort at meaningful dialogue. No serious attempt to resolve difficulties."

Rather than press the British Government to implement outstanding aspects of the Good Friday Agreement or to deliver on their own commitments, he said, "the Irish Government is leading the charge in the campaign against Sinn Féin. This is the politics of the cul-de-sac. The politics of spin."

Sinn Féin will weather this storm, he pledged. "There is confusion out there. There is anger. But for the first time in decades Irish republicans are politically organised throughout this island and no amount of misrepresentation or vindictiveness is going to prevent us from continuing with our work.

"What is that work? To continue the process of change by defending the Peace Process, by opposing any return to violence by anyone, including British Government agencies, by campaigning for the equality and other elements of the Good Friday Agreement and by upholding the rights of all citizens, including those who vote for our party.

Adams said that Sinn Féin is prepared to enter into meaningful dialogue and that he believes these outstanding issues can be resolved, and the work to do this should commence now. But, he said, "it is obvious that the Irish Government and others are of a different mind".

"All of them are already fighting the elections. They are setting out their agenda and creating the most negative context possible. This is nothing new. In the northern elections Fianna Fáil, Fine Gael, the PDs and Labour have always campaigned vigorously for our opponents.

"We will not abandon the Peace Process for anyone and our negotiating team will engage, not on the DUP agenda, or the PD agenda but on the tried and tested basis that has brought the changes in recent years. We will not exclude any item in a genuine effort to build the peace but we will not acquiesce to any one-item agenda.

"I have spoken of how united our opponents are in attacking us. They are united also in their conservatism on many social and economic issues and they have something else in common in regard to the Peace Process. They have not put forward one constructive suggestion of how to resolve the current difficulties. That is another glaring aspect of the short-sightedness of the current approach.

"And it is my view that they know that beating up on us is unhelpful and damaging to any effort to put the process together again. So, if there is to be no meaningful progress at this time, if the only agenda is to be the election — well, we're up for that. Not just here in the North but in the Údarás elections and in the upcoming by-election in Meath."