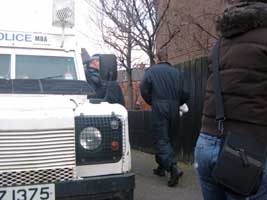 South Belfast Sinn Féin Councillor Alex Maskey has said attempts by politicians to turn the tragic stabbing of a man outside a bar in the city at the weekend into a political point scoring exercise is shameful and despicable.

Robert McCartney (33), from the Short Strand, was found fatally wounded in Cromac Street, having suffered stab wounds to the stomach. It is thought he was injured during a fight in Magennis's Whiskey Cafe in nearby May Street on Sunday night.

"Allegations have been made by Reg Empey, Sammy Wilson, Alasdair McDonnell and now also Mark Durkan," said Maskey. "These include an outrageous claim that republicans are in some way covering up the events of Sunday night and orchestrating the recent trouble on the streets of the Markets. These allegations are clearly untrue and without foundation. There is no cover up and no orchestration of street violence. That is why none of these individuals have been able to produce one scrap of evidence to back up their claims.

"None of them have set foot in either the Markets or the Short Strand in recent days, unlike republicans, who have been on the streets trying to maintain calm. Their interventions have not been motivated by any desire to help or assist the McCartney family or the local community but have instead been entirely motivated by a despicable desire to try and politick around the tragic death of a young father of two."

Earlier, Sinn Féin had hit out over the heavy handed tactics used by the PSNI as they carried out raids on the homes of republicans on Monday night and Tuesday. Six people have been arrested and questioned about the stabbing.

The PSNI moved into the Markets area on Monday evening and targeted the homes of republican activists. Up to 20 PSNI Land Rovers and riot-clad personnel were involved in the searches at five houses in Stanfield Row. Trouble flared when local people, incensed at the PSNI behaviour, pelted them with bricks and bottles.

Alex Maskey accused the PSNI of taking a heavy handed approach during the raids and of using them as an excuse to antagonise young people in the area.

"The scale and approach of their operation is unacceptable," he said. "Streets had been sealed off from Monday at lunchtime as PSNI members searched a number of houses and not a man, woman or child did anything to stop them."

Maskey said the mood changed when the PSNI started to kick down doors of homes of known republicans.

"We tried to quell the violence after the arrival of the PSNI, who were kitted out in full riot gear. On a number of occasions we walked in front of the PSNI Land Rovers to stop children throwing stones."

Maskey said that as they talked to the children, more Land Rovers arrived and inflamed the already delicate situation.