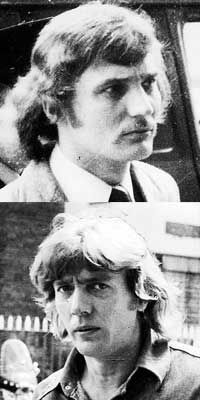 In 1973, two self-proclaimed British spies, Keith and Kenneth Littlejohn, were convicted and jailed for a £67,000 armed robbery at a Dublin bank - it was at that time the biggest robbery to date in Irish history.

During their trial the brothers said they were working for the British Government against the IRA. They said they had been told to stage the robbery to discredit the republican organisation and force the Irish Government to introduce tougher measures against its members.

The Littlejohns had been recruited in 1972 by John Wyman of MI6, who handled a number of agents in the Six Counties and paid them substantial sums of taxpayers' money to infiltrate the IRA and to act as agent provocateurs, organising and conducting bank robberies and bomb attacks in the South.

The most recent allegations against the IRA in relation to the Northern Bank robbery can be seen in this context of a long line of dirty tricks and politically motivated smear tactics by the British. They are the latest in a litany of accusations from the British Government and unionism during the Peace Process, used as political cover to either collapse the Good Friday Agreement institutions or as a reason not to restore them.

Whenever progress has looked likely, whenever it looked as though there was no get-out clause for unionists, suddenly a major 'scandal' would be revealed very publicly - think the Castlereagh break-in, the Stormont raid and the Northern Bank robbery.

The accusations against the IRA would be very loud, but the subsequent admissions that they were false, that there was no evidence, that the people arrested were innocent, were very quiet.

Almost immediately, the RUC started briefing the media that it was the IRA who had shot him. The next day, a senior UDA figure was killed in Dunmurray, on the outskirts on West Belfast. Again, the RUC pointed the finger of blame at the IRA. A short time later, three men were arrested in Twinbrook.

Within days, the RUC Chief Constable Ronnie Flanagan was telling British Secretary of State Mo Mowlam that the IRA was responsible for the attacks.

The IRA said that its cessation of military operations remained intact. As the multi-party talks were preparing to move to Dublin Castle for three days of discussions on Strand Two, David Trimble led demands for Sinn Féin to be expelled from the talks.

The Sinn Féin delegation challenged the British to present the evidence and, of course, they couldn't do so. Inside Dublin Castle Martin McGuinness told journalists "we intend fighting this every step of the way. Our mandate comes from the people, not from the RUC." But despite the fact that there was no information to substantiate the British accusation, they indicted Sinn Féin, who were then expelled from the talks.

Mo Mowlam, writing about these events in her autobiography in 2002 said: "I accepted and agreed with the RUC Chief Constable's assessment that the IRA authorised and were responsible for the murders. At first the Irish were wobbly, fortunately the information they were getting from their security people was the same as mine. And in the end we issued a joint statement concluding the IRA was involved."

An interesting and important postscript to this crisis came with the release several months later of the three men whose arrest and alleged links to the IRA had been used to justify Sinn Féin's expulsion. The releases did not get the same coverage as the arrests.

August 2001: The international arms decommissioning body, headed by General John de Chastelain, said the IRA had put forward a plan to put its weapons "beyond use". The UUP wasn't happy and once again the Assembly was suspended, this time by John Reid, for 24 hours on Saturday 11 August.

September 2001: Two days before the deadline for solving the political crisis, the IRA released a statement saying that it was "intensifying" its engagement with the decommissioning body. Once again, the UUP refused to accept the contribution being made by the group. On the 21st, Reid again announced a 24-hour suspension.

April 2002: Even though the IRA was on cessation and republicans vehemently denied involvement, Chief Constable Ronnie Flanagan accused the IRA of masterminding a break-in at Special Branch offices in the top security Castlereagh complex in East Belfast. Nine people were arrested in connection with the burglary. Eight were later freed without charge and the ninth was charged with an unrelated matter. Nevertheless, David Trimble insisted the British Government must press for sanctions against Sinn Féin.

October 2002: Sinn Féin's offices at Stormont were publicly raided and allegations were made that republicans were involved in a massive spy ring. The computer discs carried by the PSNI out of the offices, a shot shown around the world, were later returned to the party. Sinn Féin's head of administration at Stormont, and three others, were remanded in custody. David Trimble threatened to take all his ministers out of office if Sinn Féin was not dealt with. On the 14th, Reid announced a new suspension.

A woman arrested was later released without charge. Subsequently, the serious charges of spying and 'holding documents which could be of use to terrorists', against the other three people arrested were dropped.

January 2005: PSNI Chief Constable Hugh Orde claimed the IRA was responsible for the 20 December Northern Bank robbery. Even after a second statement from the leadership of the IRA denying involvement, Orde, the DUP, the SDLP and the 26-County Government continued to claim, without a shred of evidence, that the IRA was responsible.