Palestine represented at Bloody Sunday events in Derry - Time for Truth: From Bogside to Basra 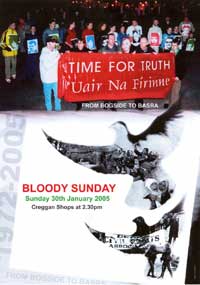 Each year, the annual Bloody Sunday commemoration programme of events seeks to breathe life into the inscription on the monument to the victims of that day: "Their epitaph is in the ongoing struggle for democracy."

So while remembering the 14 local people murdered on Bloody Sunday and their families' continuing struggle for truth and justice the organisers also consider the consequences this act of state terrorism continues to have on events right up to this day.

Had Lord Widgery in 1972 acknowledged the truth of what happened on Bloody Sunday, it may not of itself have fundamentally changed the nature of the British State or its role in Ireland. It would, however, have made it harder for that state to continue to sell the lie that its army was an impartial 'peacekeeping' force. In turn, this would have made it more difficult for its soldiers to continue to literally get away with murder here and for the same unwritten institutional policy to be now claiming the lives of uncounted victims in Iraq.

This year's programme of events starts on Monday 24 January, culminating in the annual march and rally on Sunday 30 January. It creates space for a local assessment of 'The Truth of Bloody Sunday' in the wake of Lord Saville's inquiry. And, while the families wait to see if he has the courage to tell that truth, those participating will reflect on the experience of British Army occupation and use it to better understand the plight of the peoples of the Middle East.

From Bogside to Basra will discuss the illegal occupation of Iraq through the lens of Fallujah and Bloody Sunday. An Fhírinne‚ will remember the many victims of state collusion, and this year's Memorial Lecture will be delivered by Geraldine Finucane, wife of assassinated solicitor Pat Finucane. Conflicts of Remembrance will explore the difficulty in finding ways to remember all the dead of a conflict when the truth of what it was is still disputed. At a Crossroads will compare and contrast the prospects of building a just and lasting peace in Ireland and in Palestine.

For the duration of the week's events, Free Derry Wall will be painted in the colours of the Palestinian flag as an act of solidarity.

More generally, these events create a space to come and reflect with others on the importance of democracy in Ireland and throughout the world and to stand shoulder to shoulder, in solidarity with the families of the victims of Bloody Sunday and victims of injustice everywhere.

• (FILM) News from the Holy Land, Gasyard Centre, 8pm. A call for a change in the way the Palestine-Israeli conflict is reported.

• (FILM) Death in Gaza, Gasyard Centre, 8pm. A poignant and unflinching look at the lives of three Palestinian children caught up in the cycle of violence, dramatically culminating in the director's own death at the hands of the Israeli Forces.

• (FILM) Bi Dam (With Blood), Gasyard Centre, 8.30pm. Showing the spirit crushing impact of the occupation on health care, Bi Dam gives insight into a crucial aspect of life in the cities, rural villages, and refugee camps of the West Bank and Gaza Strip.

• (PANEL DISCUSSION) From Bogside to Basra, Gasyard Centre, 7pm. A discussion on the US/British illegal occupation of Iraq through the lens of Fallujah and Derry's Bloody Sunday. Speakers: Eddy Cherry, a former British soldier, stationed in Derry, now a leading member of 'Ex Soldiers Against The War', Dr Abdul Al-Jibouri an Iraqi scientist living in Derry, and Paul O'Connor, Coordinator of The Pat Finucane Centre.

• (PANEL DISCUSSION) Conflicts of Remembrance, Pilots Row, 12pm - 2pm. Discussion and question and answer session where guest speakers will explore how and why we remember victims of conflict.

• (PANEL DISCUSSION) At A Crossroads: Palestine & Ireland, Road Maps & Road Blocks to Peace, Calgach Centre, 7.30pm. Dr Jamal Zahalka, a Palestinian MP who sits in the Israeli Knesset and has been centrally involved in the struggle for truth and justice around one of Israel's Bloody Sundays against the Palestinian people, when Israeli police shot dead 13 Palestinians dead in October 2000, and Mitchel McLaughlin MLA, Sinn Féin Chairperson, will discuss the Irish and Palestinian peace processes and state repression and violence.