Charlie Kerins hanged by Free Staters - Remembering the Past 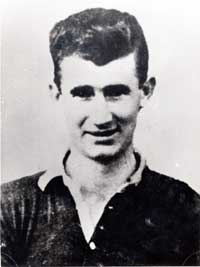 On 1 December 1944, 60 years ago, the IRA's Chief of Staff, Charlie Kerins, was hanged in Mountjoy Jail.

Charlie Kerins was born in Tralee County Kerry in 1918. At the age of 17 he joined his local unit of the IRA and took part in action against the Blueshirts in the area. In 1942, Charlie travelled to Dublin to join the GHQ staff, then under extreme pressure from the Free State Government of Fianna Fáil. Hundreds of IRA members had been arrested and interned without trial or sentence.

A year later, when Hugh McAteer was arrested, Charlie became Chief of Staff. He moved about the city under the name of Charles Hanley, constantly on the run and with a price on his head.

These were dark days for the IRA; its ranks had been depleted by constant arrests at the hands of former comrades who had taken the Free State shilling and were now members of the Broy Harriers. One of these men was Sergeant Dinny O'Brien.

Dinny O'Brien had fought with his two brothers, Larry and Paddy, in the Marrowbone Lane garrison in 1916; afterwards they had fought together in the Tan War and in 1922 Paddy was shot dead by the pro-Treaty forces in Enniscorthy.

Dinny stayed in the IRA until 1933, when, along with a number of other IRA men, he was inveigled into the Broy Harriers on De Valera's plea that "we need you to fight the Blueshirt menace". Within a few years, he was fighting and hunting his own, as rapacious as the most dyed in the wool Stater. In his time, he cut down quite a few republicans, Liam Rice and Charlie McGlade among them, shot while resisting arrest. O'Brien built up his own secret network in pubs, hotels, at stations and among the news vendors on the streets. By 1942, he had turned into a vicious and determined hunter and the IRA gave the order that he was to be executed.

At 9.45am on 9 September 1942 at Ballyboden, Rathfarnham, County Dublin, O'Brien left his house and began getting into his car. Three IRA men, wearing trench coats and armed with Thompson sub machine guns, came up the drive and opened fire. The shots from the Thompson smashed the windows of his car, wounding him. He alighted and ran for cover to the gate but before reaching it, he was cut down by a single round to the head. Two of the IRA men then wrapped the Thompsons in their trench coats and mounted their bicycles and rode towards Dublin. The third IRA man left on foot, leaving his bicycle behind. The operation was a success, apart from the abandoned bike, which had been used by IRA men including Charlie Kerins for over two months and may have had fingerprints on it.

After the shooting of O'Brien, a huge police swoop began and many of the IRA's safe houses were raided. Charlie continued to move about the city re-organising the army.

He took part with Jackie Griffiths and Archie Doyle in a robbery of the Player Wills factory on the South Circular Road, where £5,000 of much needed funds was taken. The three men arrived at the factory gates on bikes. When the van with the money arrived, they placed scarves around their faces and stopped it at gunpoint. The van was handed over and the three men drove away in it.

With the constant raids on republican houses, it became harder for the IRA to move about the city. By 1944, the IRA had just four safe houses in Dublin. One of these was 50 Upper Rathmines Road. It was in this house that the Broy Harriers were to finally capture Charlie Kerins.

On 16 June 1944 at 4am, the police raided the house. Charlie was asleep on the top floor of the house with a Thompson under his bed but before he was fully awake the police had him in handcuffs.

Charlie was charged before a military court with the shooting of O'Brien. He refused to recognise the court or enter any plea. He was found guilty on the flimsy evidence that one of his fingerprints was on the bicycle that was left behind.

At the close of the trial, the Free State officer presiding adjourned for several hours to give Charlie time to change his plea and avoid the death penalty. But when the trial resumed, Charlie told the military judges: "You could have adjourned for six years as far as I am concerned, as my attitude to this court will always be the same." The court then sentenced him to death.

Over 77,000 people signed a petition for a reprieve but the Fianna Fáil Government was determined to execute Charlie. His last letter was to his friend Liam Burke in Belfast. Charlie posted him a leaf of a calendar for the month of December, a month he would not see. On it he had written:

"What, said Cathal Brugha, if our last man's on the ground.

When he hears the ringing challenge if his enemies ring him round.

Will you come into the empire? He would answer, I will not."

At 8am on Friday 1 December 1944, Charlie Kerins was hanged in Mountjoy Jail by the English hangman Albert Pierpoint.