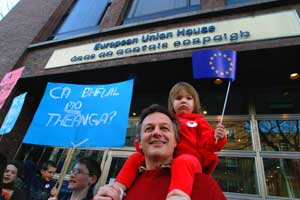 Sinn Féin MEP Bairbre de Brún on Wednesday welcomed the news of a formal request by the Dublin Government to have the Irish language recognised as an official working language of the European Union. De Brún said that these moves are a result of the "hard work, determination and commitment of Irish language campaigners".

"I am pleased to see that the Irish Government has taken on board the views of Irish language enthusiasts and set in train this process, although I will await the impact of their decision to seek a derogation with regard to translating some official documents," said the Six-County MEP.

"Sinn Féin has made the recognition of the Irish language at EU level a party priority and has campaigned long and hard with other Irish speakers and Irish language organisations to ensure that the Irish is recognised as an official working language of the EU. Not only will this provide jobs for a number of translators, it also represents equality of treatment for the language at an EU level.

"On a practical level, this step today should lead to a situation where I can use Irish in my daily work in the European Parliament to an extent not possible at present. Only last week I was reminded once again that when I speak in Irish during European Parliament debates those words are not translated or written into the minutes."