Experiencing the horror of Auschwitz - BY GERRY KELLY 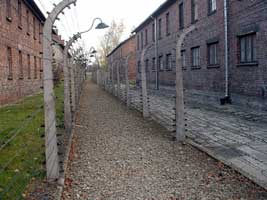 Go to Auschwitz in Poland, whatever your religious belief, or if you have none. Go whatever your political beliefs or if you think you have none. I promise you it will be memorable. It will be etched in your mind forever. Martin McGuinness and myself went on Wednesday 3 November with about 120 others, after being invited by members of the Jewish community in Belfast.

It was a one-day trip, packed with information and emotion, perhaps too much information to absorb in such a short time. What we witnessed in the first instance is some of the visual evidence of genocide on a truly apocalyptic scale. To try to put this into some sort of imaginable proportion, approximately 1.5 million men, women and children were put to death in Auschwitz in a short five-year period — not in combat or air raids or even in anger but with callous deliberation. It would be like building a wall around the population in the Six Counties, then methodically and with precision setting about killing everyone inside that wall.

Marzena Konopka-Klus was our guide for the day. A woman in her late 30s or early 40s, she was too young to experience the Holocaust. She spoke eloquently and seemingly matter-of-factly about the horrific phenomenon that was Auschwitz.

She herded us through the wide gate with ARBEIT MACHT FREI forged in a metal crescent above it. Roughly translated it means "Labour will liberate you", the first and perhaps the biggest lie to face prisoners in the camp. The rows of barrack blocks took me by surprise at first, as they are well-built brick structures but Marzena was already explaining that it was an old Polish Army barracks. The Nazis invaded Poland and those in the Polish Army went underground.

In every jail in the world there is a registration procedure for prisoners. In this camp, prisoners arrived in sealed railway cattle wagons. They fell out of the sardine-packed wagons, at times sealed in for 20 days, without sanitation facilities, to be forced into lines. The first thing they faced in the middle of gasping for fresh air, in relief and fear, was a military doctor. The most infamous one was Josef Mengele. These doctors did not medically examine anyone; they merely pointed left or right. Those to the left became prisoners; those to the right went straight to the gas chambers.

Marzena moved us through block after block, giving us details that shocked and penetrated deep into the psyche. There were many contemporary photographs taken by the Nazis recording scenes from the camp, including queues of emaciated and vacant eyed men, women and children. There was room upon room of the grotesque art exhibition. A house-sized room of nothing but combs piled high, diagonally from floor to ceiling. Another with shoes, another with clothes. One contained artificial limbs which were to be recycled for use by German soldiers.

In one room was six tonnes of human hair — mostly from women, because the longer hair made it easier to weave in textile factories. Another room had pots and pans, while yet another was full of old eyepieces. We were invited to check what percentage of our group wore spectacles to have some understanding of the volume of human suffering the spectacles represented. There were rooms of old and marked suitcases. Some had WAISENKIND painted on, which means 'Orphan'.

There was a sickly odour throughout — probably because most of the material was natural cloth and leather. In one room, hand-knitted baby clothes were laid out neatly under glass. Speaking amongst ourselves later, it was this exhibition which appears to have affected people more than any other.

There were notices here and there requesting respectful silence. They were perhaps unnecessary, as most moved about silently with their own thoughts. This is a meditative tour.

There was more for the imagination to cope with. We were brought to the punishment block, where a lot of Polish political prisoners were held. There were hunger cells where POWs were starved; dark cells where people were put for long periods without any light and little air — many suffocated. There were standing cells — narrow built cubicles where the entrance was only knee high and big enough for only one person to stand in. Those who tried to escape went through torture if caught. The Nazis, as punishment for the attempt, would kill ten other people. If they found the family of the escaper, they were first to die.

Outside the punishment block, a death wall was built, with a pit in front of it. The pit was filled with gravel and the windows of the adjacent barrack-block were covered over. There was continuous "court-martial", with POWs sentenced to death. They would be shot individually by a "silenced" weapon at the pit. For some reason, the Germans did not want others to know (there were houses close by) about these killings. The other prisoners learned to count the dull thuds during the long days. In the punishment yard there was also high posts with hooks. One of the punishments was to tie the hands of the POW behind their backs and then to hang them by their hands on the hooks. The result was dislocation of limbs. With such injuries, the POWs couldn't work — being useless to the Nazis they were then killed. There was a 'catch 22' to every act that led to death.

Marzena took us to the Barrack Block, where gynaecological experiments were carried out. The experiments, carried out on women and children, were as varied as they were horrific. One of the things Josef Mengele would do was to 'produce' Siamese twins by sowing twins together and also to kill twins at exactly the same moment.

Another part of Auschwitz was Birkenau. A special railway was erected to take prisoners straight there. This was a huge purpose built camp where the Nazis erected hundreds of huts to hold prisoners and four huge gas chambers and ovens. Before abandoning Auschwitz, they destroyed the chambers at Birkenhau but they couldn't destroy the one in the old Polish Army camp because the Nazis had built it for a dual purpose. It was a bomb shelter as well as a gas chamber. They were able to put 2,000 people in this single gas chamber at a time, convincing the prisoners that it was a shower and delousing building. Using containers of Zyclon-B gas, the Nazis murdered 2,000 people at a time in 20 minutes. On average, Marzena says, they killed 8,000 Jews a day but ironically, in latter days as they were losing the war, (and knew it) they were murdering 24,000 per day.

I cannot repeat or articulate all the horrendous information our guide imparted to us in the few hours we spent there. At first, I wondered at the matter-of-fact way she spoke. I thought it was perhaps that repetition which is a hard service to provide but when occasionally one of the group asked a probing question, it would trigger off a different level of detailed information, even more horrendous, from deep inside our guide.

Experience had taught her the right volume of information to impart on such a tour to have the 'lest we forget' impact. I believe it works well.

The Polish name for Auschwitz is Oswiecim, and the concentration camp — one of many — was built within the city's municipal borders. In the five years of its existence, nearly all aspects of the Nazi vision were implemented there. The Nazis wanted to completely re-organise the world's demographic structure. The genocidal method was on an apocalyptic scale. Auschwitz became a gargantuan murder machine where over a million Jews, over 70,000 Poles, 20,000 Romany people, and 15,000 Soviet POWs as well as several tens of thousands of citizens from other countries lost their lives.

When the tour was over, Marzena finished by saying: "I don't want you to say this was a good or enjoyable tour, I want you to go away disturbed and with the knowledge it could happen again. Indeed, similar things have happened and are happening."

Unfortunately, she is telling the truth. Go to Auschwitz if you get a chance. The more people who realise that scenes like this have happened again since then, in Rwanda, in Kampuchea and to indigenous Amerindians in South America to name but a few, the more chance people can see the devastation it causes and avert it happening again.