Governments told any deal must be bedded in the Agreement 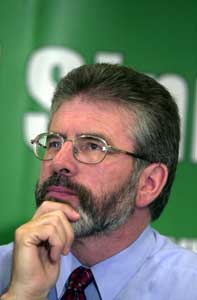 Speaking to An Phoblacht as we go to print on Wednesday evening, Sinn Féin President Gerry Adams stressed that no agreement has been reached to break the impasse in the Peace Process.

"We have received no assurances from the DUP that they intend to share power with Sinn Féin," he said. "This is important to clarify because I realise that republicans have been bombarded with media spin and speculation, occasionally presented as fact, which has caused annoyance and concern."

He was speaking after a Sinn Féin leadership delegation, also including Chief Negotiator Martin McGuinness, National Chairperson Mitchel McLaughlin and Fermanagh/ South Tyrone MP Michelle Gildernew, met Taoiseach Bertie Ahern at the Irish Embassy, just one in a series of recent meetings between the governments and the parties.

Adams said that the party's objective in the intense discussions with the two governments has been twofold. "Firstly, to get the DUP to come on board a comprehensive agreement. Secondly, to ensure both governments remain faithful to the Good Friday Agreement."

"These points are particularly important today, given that the DUP has given a lengthy list of points to the two governments for clarification. In response to this, it is important that the governments insist that any agreement reached must be bedded in and aimed at the delivery of the Good Friday Agreement.

"That is our clear message to the two governments today."

He added that there are other outstanding matters also to be dealt with, including breaches of the Agreement by the two governments.

Speaking after meeting with British Prime Minister Tony Blair, Bertie Ahern said the aim was to restore the institutions by the spring. He described the governments' proposals as "a good offer" and said a decision must be made within days. Ahern said that if the deal was rejected, he believed the governments should publish it.

Gerry Adams has consistently said that there must come a point when, if the DUP aren't up for a deal, the governments need to call it and publish.

The Sinn Féin Ard Chomhairle will meet in Dublin today, Thursday 25 November, to be briefed by Gerry Adams on the current state of the political negotiations.

Eyes on the prize

Writing in the Irish Times on Monday, the Sinn Féin President had expanded on the current situation. "The outline for a comprehensive agreement presented by the two governments to Sinn Féin and the DUP is a work in progress," he wrote.

"No one should argue about the need to find better ways to implement the Agreement or to iron out some of the technical or procedural flaws which have emerged and which were exploited by both the UUP and the DUP. Indeed, Sinn Féin has put forward a series of proposals to correct these. Of course, there can be compromises on delivery. But even on these issues compromise is a two way street. Negotiations aren't just about taking. It's also about giving.

"Thus far the DUP have given nothing.

"We are also trying to ensure that the governments' proposals do not weaken any aspect of the principles of the Agreement. But because of the sensitivity and the importance of these negotiations, we have refused to disclose any of the details. Unfortunately, others have not been so restrained.

"The SDLP in particular have been attacking Sinn Féin on the dubious premise that we have signed up for a deal which is a good deal for the DUP. The truth, of course, is that there is no deal. That's why the work continues."

Referring to an article in the Irish Times (Monday, 15 November) by the Irish Labour Party leader, Adams said that Pat Rabbitte "is one of the few senior Irish politicians to have made no positive contribution to the Irish Peace Process. Indeed, he is so fixated with the electoral challenge to his party from Sinn Féin that he ignores entirely the real obstacles to the full implementation of the Good Friday Agreement — the rejectionist position at this time of Ian Paisley and the role of the British Government.

"Sinn Féin has a proven record of working the institutions. We want a comprehensive agreement with both governments and with unionism.

"If the DUP is not prepared to join with the rest of us, it is both necessary and legitimate to identify other options for securing the principles of the Agreement. In other words, the two governments need to compensate for this with new, imaginative and dynamic alternatives. This includes joint responsibility for the areas of government that would otherwise have been administered on a power-sharing basis.

"The Irish Government is a co-equal partner in the Good Friday Agreement and it has a responsibility to give immediate and tangible expression to this. That is why Sinn Féin has put forward proposals on this issue. Sinn Féin, as the largest pro-Agreement party in the North, has a special responsibility to defend and promote the Agreement.

"Unionists have expressed other concerns about republican intentions and that is a different matter. Within reason there is a duty on us to try, if we can, to remove those fears without undermining our electoral rights or our mandate.

"But there is also a duty on political unionism to face up to its responsibilities.

"The next week or so will clarify whether their leaders are prepared to do that at this time."

• Sinn Féin National Chairperson Mitchel McLaughlin and Fermanagh/South Tyrone MP Michelle Gildernew met British Secretary of State Paul Murphy on Tuesday 23 November at the NIO Offices in London to discuss a peace dividend to underpin the work of any new Executive and to address the legacy of underfunding and discrimination, inequality and discrimination.

The Sinn Féin delegation also discussed the issue of party policy research grants, currently denied to the party, and the IMC-derived sanctions against the Sinn Fein Féin electorate.