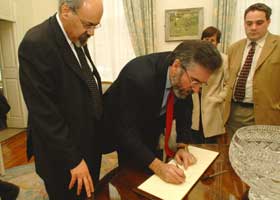 On 18 November a large crowd attended a candlelit vigil to commemorate the one-week anniversary of the death of the Palestinian leader, Yasser Arafat. The candlelit procession was organised by the Ógra Shinn Féin cumann of Queens and Jordanstown Universities and took place on Palestine Street in the Holylands area of Belfast.

The vigil was attended by residents and students of the area, including international representatives from the Basque Country and Catalonia. The group gathered at 7pm and began the commemoration with a minute's silence to reflect on the lifetime contributions of Yasser Arafat to the Palestinian conflict.

Speakers present at the vigil included Sinn Féin North Belfast councillor David Kennedy, who praised the high turnout on such a cold and wet night, in particular the young people who are key figures at the heart of all international struggles. Jaume, a Catalonian youth present at the vigil, spoke of his joy to witness such a strong presence of international solidarity evident in the large crowd gathered to commemorate the death of Yasser Arafat.

The key address was delivered by Alex Maskey MLA, recently returned from a trip to Palestine. Alex expressed the wide range of emotions felt during his trip, due to the plight faced by the Palestinian people. He spoke of the degradation faced by the people as a whole and how no statistics or list of atrocities can truly express this until witnessed at first hand. Alex urged the crowd to continue to refresh and reflect on their knowledge of the Palestinian conflict and he expressed his hope, however pessimistic at the moment, for an acceptable solution to resolve the situation for the people of Palestine.

The large attendance at the vigil sends a strong message of hope and international solidarity to friends and comrades facing struggle throughout the world today.