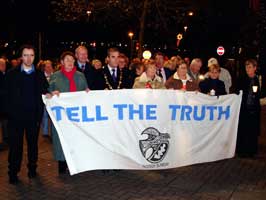 "Why and how did 13 people come to be killed and 14 to be wounded within something like ten minutes on 30 January 1972 in this city?"

That was the simple question with which Christopher Clarke QC, counsel for the Inquiry, began his summing up in at the Bloody Sunday Tribunal as it sat once again this week in Derry to hear closing submissions.

The question of how and why, continued Clarke, could be broken down into two key issues: which British soldier shot each victim and whether there was any justification for them doing so?

He said that in framing the questions in this way, he was assuming that all 27 victims had indeed been shot by the British Army — although it has been suggested by others that three of the victims, Peggy Deery, Patsy McDaid and Alexander Nash, had not been shot by soldiers.

The problem was, he said, that the evidence provided by the soldiers was "not in any way clear". It seems probable that Damien Donaghy and John Johnston were both killed by soldier A or B, Michael Kelly by F, Gerard McKinney and Gerard Donaghy by G, Kevin McIlhinney by K (a sniper), — or M and James Wray by a member of the Anti-Tank Platoon whose members, E, F, G, H, Dave Longstaff, had entered Glenfada Park. Those responsible for the remainder were, on the soldiers' evidence, unknown.

Clarke said that, given this lack of clarity in their evidence, "the Tribunal may attach some significance to the fact that so much is unexplained, particularly in sectors 3, 4 and 5 into which the Anti-Tank Platoon fired. It might conclude, taking that fact with all the other evidence, that so much is unexplained because no justifiable explanation could be given." On the other hand, he said "it might take the view that uncomfortable facts have been airbrushed out of history and that the situation the soldiers faced was radically different to that of which the civilian evidence speaks".

As counsel to the inquiry, Clarke's summing up offers the best clue to what conclusions Lord Saville and his colleagues are likely to reach. After his suggestion on Monday that few of the soldiers could be proved beyond reasonable doubt to have shot particular individuals, there is concern that the Tribunal will be reluctant to single out individual soldiers for blame.

During his summing up, Clarke outlined the political context to the events of Bloody Sunday. He reminded the inquiry that on 7 October 1971, at the British Government GEN 47 meeting in London, "Mr Heath expressed the view that the first priority should be the defeat of the gunmen, using military means, and that in achieving this [they] should have to accept whatever political penalties were available".

From that point, he said, a "a number of themes run through the documents. One is that the defeat of the gunmen is the first priority.

"Another is that a purely military situation was unlikely to succeed. A third was that if there was progress in the security front on the defeat of the gunmen, there could, would or might be a window of opportunity for a political initiative at a time when the gunmen were demoralised and the Protestant community satisfied that security was being brought under control."

Throughout the inquiry there have been consistent suggestions that the British Government and Army saw the Civil Rights march on 31 January 1972 as a 'window of opportunity' to take on the IRA in order to mollify the unionist administration.

Clarke went on to say that the tribunal would have to consider whether the contents of General Ford's now notorious memo, written shortly before Bloody Sunday, amounted to a suggestion of a shoot-to-kill policy.

The memo proceeded, he explained, "on the basis that the contemplated policy involved shooting selected ringleaders, and recognised both the devastating effects of a 7.62mm bullet, and that to use it for that purpose risked killing more than the person aimed at, and that on that account less lethal ammunition should be issued when ringleaders were engaged, and also accepts the possibility that .22 rounds may be lethal".

Although there were qualifications to the proposals, "it seems difficult to escape the conclusion that what was contemplated was that shots should be fired at ringleaders which would, at the lowest, expose them to a high risk of death and probably kill at least some of them. This is underscored by the fact that soldiers are trained to shoot at the body mass; they are not taught to shoot to wound."

The inquiry is due to consider final written submissions from all the parties before finally retiring to consider its conclusions. The final report is due to published next summer, although there are suggestions that it may be delayed.

• The Tribunal was established in April 1998

• There have been 366 days of oral evidence

• 921 people have given oral evidence

• 42 witnesses gave evidence from behind screens

• 33 were former members of the IRA or OIRA

• 49 were representatives of the media

• 9 were experts and forensic scientists