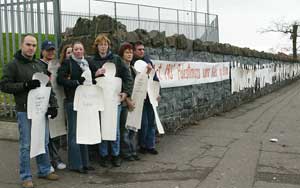 Members of the Irish Palestine Solidarity Committee (IPSC) held a picket on the Falls Road on Saturday 20 November to highlight the genocide carried out by the Israeli Government of Ariel Sharon against the Palestinian people.

In October alone, over 190 Palestinians, among them 37 children, were gunned down by Israeli forces.

During the Belfast protest, supporters held cardboard cutouts representing each of those killed and asked passersby to write the name of each dead person on a figure.

"We want to remind people that the 190 people killed have names," said a spokesperson for the IPSC. "They had dreams and aspirations and were people with mothers, fathers, brothers and sisters. There will be no justice and no accountability for the families of the dead. No one will ever be charged with their killing." He finished by calling on people to join the IPSC and to join in the boycott of Israeli goods.

The IPSC is to hold a protest outside Belfast City Hall this Saturday between 2pm-3pm, to mark International Solidarity Day with Palestine.

And on Saturday 18 December, the group will hold a collection for the Palestine's Child charity in Westwood Centre between 12 noon and 5pm. The 50-strong Irish language choir Coir Loch Laoi will be singing during the collection.

Palestine Christmas cards are available from the IPSC, price £5 for 10. Contact feilim at [email protected]