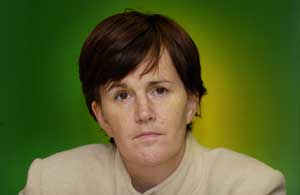 Sinn Féin Equality, Human Rights and Women's Spokesperson, South Down MLA Catríona Ruane, has called on the British Government to introduce the proper range of powers required by the Human Rights Commission to fulfil its remit to protect and promote human rights in an effective way.

Committee on Torture this week which will scrutinise the British Government's treaty obligations and in many instances, its failure to comply with human rights and equality issues in the North of Ireland.

"It is unacceptable that six years after the Good Friday Agreement was signed, that the Human Rights Commission has again had to make representations to the United Nations about the British Government's obstruction of its work by its refusal to provide the Commission with the appropriate powers.

"Issues such as state collusion, the continuing use of non-jury courts, plastic bullets and repressive legislation should have been relegated to the dustbin as a result of the Good Friday Agreement. Yet the British government is eroding individual and collective rights by maintaining them.

"Sinn Féin raised these and issues such as the need for accountable and representative policing and criminal justice systems with the United Nations during its last hearing and only last week we met with the Council of Europe's Human Rights Commissioner to voice our concerns across similar matters.

"The failure of the British Government to provide the HRC with the proper range of powers it requires has plagued the Commission since its inception. The danger is that any incoming Commission will inherit many of the same problems.

"One of the issues being tabled at the UN is the situation of women prisoners held at Hydebank Wood Young Offenders Centre, which the Commission cannot access because it does not have this specific power. How can a Human Rights Commission protect human rights in such circumstances when access is blocked by the Prison Service and it has no power in its own right to overturn such decisions? Without these basic powers any incoming Human Rights Commission will be undermined before it begins."

• The HRC, in its annual report, has described as "extremely disturbing" the findings of retired Canadian judge Peter Cory that there was evidence of collusion between members of the crown forces and unionist killer gangs.

The Commission said the British Government has, in light of the Cory findings, a duty to put in place measures which ensure there can be no recurrence of that collusion.

Said chief commissioner, Professor Brice Dickson: "The British Government should do more to investigate fully the allegations of collusion.

"There is nothing which more seriously undermines the rule of law than the active involvement by law enforcement bodies in the activists of terrorist and or criminal organisations.

"The government has a duty to bring such activities to light and to put measures ion place to ensure they cannot recur".