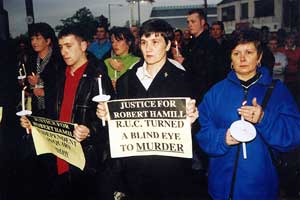 A judge who acted for the British crown during internment proceedings will chair the inquiry into the 1999 killing of Lurgan defence lawyer Rosemary Nelson.

Sir Michael Morland, who also served on the Gardiner Commission into internment in 1974, will be joined by Sir Anthony Burden a former chief constable of South Wales police and Dame Valerie Strachan, vice-chair of the Big Lottery Fund.

Former High Court Judge Sir Edwin Jowett, who is to chair the inquiry into the sectarian killing of Portadown Catholic Robert Hamill, will be joined by Sir John Evans, ex-chief constable of Devon and Cornwall, and the former moderator of the Free Churches of England and Wales, Reverend Baroness Richardson of Calow.

Rosemary Nelson's brother Eunan Magee, while welcoming the development, expressed his disappointment that "we weren't given any proper consultation into the members of the inquiry nor the terms of reference.

"At a previous meeting with the NIO, we were asked to recommend names and no reasons were given as to why none of these people were chosen."

Magee also expressed his concern that the situation has been, "dragging on and on", saying his family would like to know when the inquiry will begin and where it will be held.

Solicitor Barra McGrory, who represents the family of Robert Hamill and Rosemary Nelson's widower, gave "a cautious welcome" to the announcement.

"Obviously there are many issues in respect of which the families would seek to consult with the chairpersons and respective panelists at the earliest opportunity," said McGrory.

Sinn Féin's policing spokesperson, Gerry Kelly, responding to the announcement, said "the British Government needs to deliver on these inquiries. It is important that the inquiries meet the demands of the families and achieve the confidence of the community".

Kelly also called on the British Government to announce "immediately" the terms of reference of the inquiry into the killing of Pat Finucane.

The inquiry into the shooting of LVF killer Billy Wright will be chaired by Scottish judge Lord Ranald MacLean, with prisons expert Professor Andrew Coyle of King's College, London and the Right Reverend John Oliver, retired Bishop of Hereford, as panelists.