O'Donnell will not seek re-election 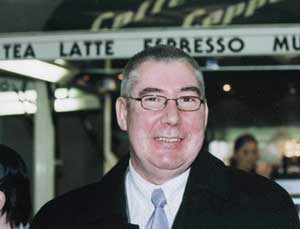 Joe O'Donnell, the Sinn Féin deputy mayor of Belfast, has disclosed he will not be standing in next May's council elections, citing personal reasons.

The 53-year-old father of three was elected to Belfast City Hall in 2001 and became the first Sinn Féin councillor to represent the nationalist Short Strand area, which is situated in the predominantly unionist East Belfast. He was elected as deputy mayor in June this year.

During his time on the council, O'Donnell was to the fore in voicing support for people from the Short Strand when loyalists, throughout 2002, laid siege to the area.

He broke new ground earlier this year when he and PUP leader David Ervine committed themselves to jointly working to aid disadvantaged areas in East Belfast.

"It has been a personal and political privilege for me to serve in this role, but after careful consideration and discussing the matter with my family and friends, I have decided not to seek a nomination in next year's local government elections," he said.

Sinn Féin national chair Mitchel McLaughlin said Joe had played an important role in the development of Sinn Féin in Belfast for many years.

O'Donnell survived a UDA murder bid in 1989 after UDA gunmen burst into his home, but Joe wasn't home and the gang fled.