The ceasefire that never was 'reinstated' 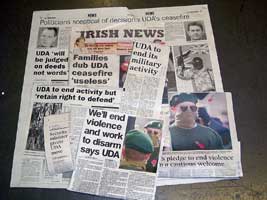 Nationalists have reacted sceptically to a declaration by the notoriously sectarian UDA that it is prepared to move away from violence and reinstate its ceasefire. The announcement came during a number of British Remembrance Sunday parades across the Six Counties.

In Rathcoole, around 2,000 loyalists, accompanied by a contingent of masked and paramilitary uniformed members of the UDA, were addressed by the leader of the Ulster Political Research Group, Tommy Kirkham. A similar gathering was addressed by Andre Shoukri in Tigers' Bay.

The UDA was now prepared to move into a process, said Kirkham, reading a prepared UDA statement. "Our commitment to that process will be to work towards a day when there is no longer a need for a UDA and a UFF," said Kirkham.

The UDA would desist from all violent activity to pursue a strategy of "community development, job creation, social inclusion and community politics", said Kirkham.

The UDA announced it would support unionist politicians in the aim of securing a lasting peace and that it has made a commitment to the British Government to enter into a process that "will see the eradication of all paramilitary activity".

Fighting shy of announcing any intention to engage in actual decommissioning, the UDA said it would engage with the decommissioning commission but with the added caveat that it must be confident that there is no longer a threat to the loyalist community from a republican group.

Kirkham said that the UDA hoped to persuade people that the organisation could change. "We recognise the need for change. We will be more effective in our new role but will remain protectors of our community."

The UDA's announcement followed an earlier meeting with the British Government and the decision by the British Secretary of State to despecify the UDA's ceasefire. Announcing the decision on Friday, Paul Murphy admitted he was taking a gamble but said he was persuaded that the UDA was serious about seeking a new beginning.

But the decision to recognise the UDA's ceasefire was made despite the fact that increasing racist attacks against ethnic minority groups have been added to ongoing sectarian attacks against the nationalist community and the continuing link of unionist paramilitaries with illegal drug trafficking.

"My decision was reached only after the most careful consideration and is based on a number of facts in line with the legislation," reassured Murphy. The British minister declared himself persuaded by recent discussion with the UPRG that the UDA was now prepared to "go down a different road".

News that the deal between the British Government and UDA also involved a £3 million cash injection left many to wonder if this amounted to a British payoff to loyal gunmen. NIO Security Minister Ian Pearson was left to deny that any money had been promised to the UDA. "The British Government does not fund paramilitaries," insisted Pearson, and clearly the Minister almost believed it himself.

Apparently, the cash is headed for those community development projects in which the UDA have conveniently just declared an interest. After all, loyalist areas have 'lost out' in terms of funding and support since the peace process, said Pearson. "I think there's a really important issue in working class loyalist areas. When it comes down to it, with some justification, they feel they have lost out when it comes to funds," said Pearson.

Curiously, Pearson's comments could be construed as reminiscent of a strategy pursued by another British Labour Party Minister a century earlier. Aneurin Bevan advised the British Labour government of his day to "stuff their mouths with gold" as a means of overcoming the medical profession's reluctance to co-operate with the newly formed National Health Service. But I suppose the parallel ends there.

"Everything is changing," said a senior loyalist source. "The [British] Government has realised that it needed to bring the UDA in from the cold if the peace process is going to work.

While UUP Assembly member Fred Cobain welcomed the initiative as a opportunity for the UDA to "prove their bona fides", not surprisingly it was greeted with a degree of scepticism by nationalist politicians and community leaders.

Sinn Féin's Gerry Kelly said it would be a welcome development if it marked an end to the UDA's campaign of sectarian and racist attacks and intimidation.

"The only test against which the UDA will be judged will be a genuine end to its campaign of attack and intimidation against the ethnic and nationalist sections of our community," said Kelly.

Mark Durkan of the SDLP said that nationalists and ethnic minorities on the ground "certainly don't recognise a ceasefire and nor do many unionists".

"The fact is that in many parts of the north, the UDA still causes terror with intimidation and hate crimes. People will judge the UDA not on what the secretary of state says but on what the UDA does, and stops doing, in our communities," said Durkan.

Fr Dan Whyte, whose church and parishioners have been repeatedly threatened and attacked by the UDA, said nationalists would be sceptical of the British Government's decision to recognise the UDA ceasefire. "I think that is inevitable," he said.