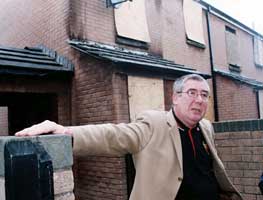 "For years the UDA has engaged in sectarianism and racism and now it is imposing physical apartheid," said Sinn Féin's Joe O'Donnell, responding to a UDA statement that unionist paramilitaries had drawn an "orange line" around Protestant areas, beyond which Catholics would not be permitted.

O'Donnell, Belfast's deputy mayor, lives in the nationalist Short Strand, a Catholic enclave in a predominantly unionist area of Belfast. Two years ago, the area endured months of violent attack after it was besieged by unionist paramilitaries.

"The UDA's orange line is nothing more than an attempt to intimidate Catholics," said the Short Strand councillor. "This is Nazism at its most base."

Issuing sectarian threats might seem a strange way to mark the anniversary of the so-called loyalist ceasefire but then, as everyone knows, when it comes to threats and violence against Irish Catholics, members of the Chinese and Asian community and other ethnic groups, there has never been a loyalist ceasefire.

The UDA and other unionist paramilitary groups like to imagine their violence in terms of defending the Protestant community. But the question is, defending them against what? If the UDA is defending Ulster Protestants from the 'contamination' of those of a different religion or racial origin living next door, then they are nothing more than fascists and it's about time the unionist politicians, both the UUP and DUP, stopped pandering to their racist agenda.

Issued under the auspices of the UPRG, the UDA statement said: "We have declared an Orange line around all Protestant areas, whilst we realise that one community is growing faster than the other, we cannot allow another garden, another house or another street to be attacked."

During recent years, unionist paramilitaries, particularly the UDA, have been involved in racist attacks against members of minority communities, primarily Chinese, Asian and African. In traditional unionist paramilitary style, individuals have been brutally beaten and homes have been targeted and attacked, forcing terrorised families to flee. These attacks have been accompanied by the appearance of nazi-style graffiti, often with reference to fascist groups in England.

It is the general practice in the North of Ireland to distinguish between racist and sectarian violence, despite the fact that to be Catholic in the North is to be identified as Irish and nationalist. When a racist bigot within the UDA targets a Catholic family, who can seriously differentiate the motivation? And yet anti-Irish Catholic violence is often dressed up as something less appaling, even at times 'understandable'.

Any suggestion that ethnic minorities bring violence against them upon themselves would be immediately recognised as so disgusting that anyone peddling such racist nonsense would rightly attract universal condemnation. But such innuendos are routinely attached to violence against Catholics in the Six Counties, even when it is carried out by the same appaling racists that are attacking the Chinese, Asian and African communities.

We have only to recall the outrageous response of many state agencies, civic society and the media to unionist paramilitary violence and abuse of the children of Holy Cross. Rather than condemning outright the blockade of a Catholic primary school and the vile targeting of children, some as young as four years of age, the media and other agencies attempted to explain away the unionist violence of Glenbryn.

During the Holy Cross blockade, unionist violence was explained away in terms of social deprivation as if poverty and unemployment could justify throwing pipe bombs at little girls because they were pupils at a Catholic school. Even the head of the Human Rights Commission, Brice Dickson, characterised the outrageous scenes of grown men and women attacking children and their parents on the way to school as a question of "competing rights". It was a serious lapse of judgement that would later almost destroy the HRC.

Catholic encroachment is routinely used as a justification for unionist paramilitary violence and this is reflected in the UDA statement. "We realise that one community is growing faster then the other," says the UDA. This is an admission unionist paramilitaries rarely concede.

More often, a Catholic family moving into a predominantly Protestant area is depicted as a republican conspiracy to "drive Protestants out" rather than the result of the acute housing shortage experienced by the nationalist community. A situation itself largely engineered by unionist paramilitaries who have traditionally corralled the nationalist community into overcrowded ghettoes through the threat of sectarian intimidation.

The UDA statement's suggestion that Catholics can't be tolerated within predominantly unionist areas because they're all uncontrollable vandals is racist nonsense. "We cannot allow another garden, another house or another street to be attacked," Such a statement is the corollary of suggesting black people can't move into an area because there would be more muggings. Both are outrageous racist stereotypes.

But predictably, the local unionist politician, Nigel Dodds a senior member of the DUP, failed to condemn the UDA statement. Clearly aware of its racist and sectarian overtones, Dodds said he wanted to study the statement further before commenting. "I welcome that there are discussions going on within loyalism on the way forward," said Dodds.

This isn't the first time the UDA has attempted to draw an Orange line (after all it was the basis of partition). Ten years ago, the UDA produced a doomsday scenario that advocated the ethnic cleansing of Catholic populations as a means of securing four out of the six counties.

The scenario had been developed from the academic writings of a professor at Queens University, Liam Kennedy. In an essay 'Two Ulsters- a case for re-partition', Kennedy had argued that two of the six counties would become so overwhelmingly Catholic that they would have to be conceded to the south.

The UDA's doomsday plan further suggested that ethnic cleansing would be accompanied by mass hostage taking in which captured Catholics in the east could be used as "bargaining chips".

"If all Roman Catholics could be rounded up the process could be finished within one to two weeks." Mass expulsion and hostage taking was to be accompanied by "nullification", a euphemism for mass slaughter.

"Roman Catholics stranded behind loyalist lines would be either expelled, nullified or interned." The document considered these options, declaring expulsion as "reducing the demands on food but giving enemy forces extra men". On the other hand "nullification", while "difficult", resolved food shortages without swelling the ranks of the opposition.

Clearly, fascist doctrine and ideology have been part of the UDA psyche for a very long time. In 1994, when the UDA plan appeared in the media, far from condemning it, unionist politicians welcomed the "battle plan" as "a very valuable return to reality".

"While some will no doubt denounce and ridicule their plan, nevertheless it shows that some loyalist paramilitaries are looking ahead and contemplating what needs to be done to maintain our separate Ulster identity," said DUP spokesperson Sammy Wilson.