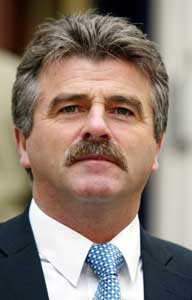 Louth TD Arthur Morgan set veteran Tory MP Michael Mates' veins popping at the British Irish Inter-Parliamentary Body meeting on Monday, when he told him that Ireland will be united before there is a Tory government in Britain.

The Sinn Féin TD told the meeting in Wales that he was pessimistic about the Conservative Party's chances in future general elections.

"We'll have a united Ireland before the Conservatives get back into office in Britain," he told the meeting, which, apart from the Tory contingent, dissolved into laughter.

Mates had opened the debate with a tirade against republicans but was slapped into place by Morgan, who referred to "leaving fringe elements like the Conservatives to one side".

"I would have expected an old soldier like Mates to have respected another old soldier like myself," Morgan told An Phoblacht, "but the only organisation he mentioned was the IRA and the only impediment to peace was republicans. He's living in the past."

Morgan reminded the 68 British and Irish parliamentarians that there are still 15,000 British soldiers in Ireland. "Those people out marching this weekend against the stationing of 8,000 troops in Iraq, do they even know about this?" he asked.

He also said that the Body needs to be more than a talking shop and do something constructive if it is to justify spending taxpayers' money.