No sound of the siren 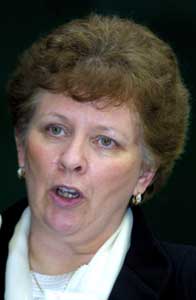 There was no sound of the siren when they came on that morning, only the roar of jeep engines and the noise of the battering ram, the sledgehammers demolishing the doors of the small family homes in Derry and Belfast. Nothing new there. Such raids have been part and parcel of the life of the nationalist community for over 30 years and they have followed a pattern of terror and intimidation by a police force whose political and sectarian agenda permitted such Fenian bashing.

But that was in the bad old days, before the 'New beginning to Policing', which saw the name of the sectarian RUC changed to the PSNI. and the appointment of a Policing Board, District Policing Partnerships and a Policing Ombudsman, who turned out to be a woman, and whose role would be to investigate complaints made against the 'new' Police.

All was changed, utterly changed. No longer would 20,000 complaints against the police result only in nine recommendations for prosecution, or so the public were told, and the SDLP urged the nationalist community not only to support the new beginning, but also to join the utterly changed PSNI.

Some people would say at the setting up of the PSNI, that the old hat with new feathers is still the same old hat but others wanted to give them fair wind. It was a case of by their actions we will know and it was not long before the actions of the new beginners to policing engaged in a series of house raids in Belfast and Derry and the spectre of the RUC could be seen by the large crowd of people who gathered outside the home of a young couple and their children.

The Derry family were awakened at 7 o'clock in the morning, by the noise of the sledgehammer, which effectively left their front door lying in the hallway.

The young Mother was confronted in the bedroom by five heavily-armed men in boiler suits, shouting 'nobody move'. She could hear her children, aged four and two years old, screaming in the next room but was physically prevented from reaching them. The mother knew that her daughter was totally traumatised, but neither she nor her partner was allowed to go to the aid of the child.

Her husband was led out handcuffed and she was told he was being taken to an interrogation centre at Lisburn.

When she was eventually permitted to leave her bedroom and go to her children, she found her daughter sitting on the floor with her hands over her ears screaming. It was clear to the mother that the child was in shock. The wee girl kept asking her 'are we going to die'? The house at this time was full of police in boiler suits and uniforms, who kept shouting at the woman every time she tried to get out of the bedroom with the children. Some time later she was told she could take the children downstairs. She was not permitted to use the phone to summon help and when her mother arrived, having been summoned by neighbours, she was refused entry to the house. The woman was still in her nightwear and was not allowed into her bedroom to dress and when she needed to use the toilet, the door was left ajar, so that those outside could see in.

Her husband, in the meantime, was being driven to Lisburn Barracks in an unmarked car, which he believes was doing speeds up to 110mph. He was detained for questioning, which the police informed him was based on 'reliable intelligence', this was later found to be without foundation. Over the next day he found out that the 'reliable intelligence' questioning, apart from allegations of involvement with the IRA, related to the football shirt he was wearing, who does the shopping in the home and other mundane matters. He was fingerprinted and had DNA samples taken and was eventually released some 38 hours after his arrest, without charge.

'The new beginners to policing' removed some thousand items from the couple's home, including all the arrested person's shoes, baseball hats, mobile phones, his car, all videos, including children's, computer discs, personal diaries, bank cards, telephone directory, cushions, shower rug and other items too numerous to mention. When they departed some seven hours later, the couple's home was left in such a state that it could not be lived in and they had to move to other accommodation. It took a squad of cleaners a week to undo the damage.

At the same time, the offices of many voluntary organisations, including The Bloody Sunday Trust, were also searched and even when keys were available, doors were busted in. Confidential documents were seized, as well as computers, files and all papers, including letters, notebooks, etc. It was all too familiar, and stirred up memories of the RUC raid on the offices of the Well Woman Centre some nine years ago, when confidential documents were read and files explored.

In Belfast, 'the new beginners to policing', in another house raid, threw stun grenades into the house where young children were sleeping. Guns were put to the occupants' heads, including teenage children, and the houses again were virtually wrecked.

But mindful that they were being told that things had changed, the families involved in the house raids complained to the Ombudsman in respect of the sledgehammering of doors, the abusive nature of those conducting the raid, the illegal manner in which the occupants were virtual prisoners in their home during the search, the treatment of the children, and whether any such child protection guidelines if in place, had been adhered to and the fact that a huge section of the media had been briefed by someone about the raids and were carrying headlines stating that those arrested were IRA people, involved in the Castlereagh security breach.

In the matter of the arrest of the man in Derry, the couple's solicitor requested the Ombudsman investigate the reasonableness of the grounds for the arrest and whether holding a person for 38 hours was justified.

The Community and Voluntary organisations also requested the Ombudsman to investigate the police access and use of confidential information, specifically in relation to counselling and emotional support services.

The Ombudsman's response to all of the complaints was brief and to the point. It stated that the Police Ombudsman does not have the power to deal with issues which amount to 'direction and control' of the police. In other words, they can seize property, destroy houses, detain persons, terrorise children, seize and read confidential files, permit the home and personal details of persons to be carried on public television and print media, thus endangering their safety.

No such problems of 'Direction and Control' stood in the way of the Ombudsman this week, when she recommended that eight of the 'new beginners' should be disciplined for their conduct during a raid on the Belfast home of the London Times journalist Liam Clarke. That raid commenced at 8.30pm and the Ombudsman was highly critical of officers who, during the search, restricted the movements of Clarke and his wife, did not allow them out of the premises or phone to make arrangements for the care of their daughter, who was sleeping at a neighbour's house. The PSNI also in this case removed documents, computers, and material. The Ombudsman also upheld the complaint by the Clarke family that the PSNI did not secure the safety of the family, resulting in them having to move house.

She also upheld a complaint by the Sunday Times that the forcing of the door of their offices in Belfast and the subsequent search was illegal .The breaking of the door of the London Times' office produced media frenzy and resulted in questions being asked of Tony Blair in the British House of Commons.

Perhaps in the eyes of the Ombudsman, journalists are a protected species, especially if you work for the Sunday Times and have the ear of important people within the Securocrats. Mind you, not all journalists are given such consideration or protection. It is three years since the murder of Marty O'Hagan who was investigating allegations of collusion between unionist paramilitaries and the RUC. No one has been apprehended.

Clarke was alleged to be in possession of classified information, obtained from the bugging operations of the Securocrats. There is speculation that the intelligence operators at MI5 and MI6 became concerned that having tried to get the dirt on Martin McGuinness and failed, Clarke may have got the dirt on others and may have had in his possession material of interest to the intelligence services. In the murky world of the British Intelligence operations in Ireland, the public may never know.

What we do know is the outcome of complaints made as a result of house searches, one in the Bogside and the other in an exclusive area of Belfast. In detail, the manner in which they were carried out was almost identical. Yet the findings of the Ombudsman as a result of complaints against the PSNI could not have been more different. In the search of the home in the Bogside, she states she does not have the power in matters of direction and operational control of the Police. But many of the complaints by Clark and the Sunday Times, upheld by Nuala O'Loan, appear to be precisely matters of direction and control. But each time that the office weighs in behind the State, as in the Clarke case and the raid on the Sinn Féin Offices in Stormont, which the world knows was politically motivated, has increased suspicion among the public that her power has been seriously compromised.