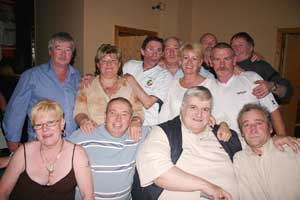 "Was it really 30 years ago?" was the most frequent comment in the Devenish Arms in Belfast last Friday night. Over 400 former prisoners attended the 1974 Burning of Long Kesh re-union, organised by former comrades and with the support of Coiste na n-Iarchimí, the republican ex-prisoners' support group.

The event was to mark 30 years since the 15 October 1974 burning of Long Kesh Prison Camp. As reported last week in my article, adverse and repressive prison conditions at the prison camp forced republican prisoners into protest and the eventual burning of the notorious Long Kesh prison. Many hundreds of prisoners were beaten — some seriously — and we were forced to live in harsh conditions for months afterwards.

Many of those who attended the event had not seen each other for almost 30 years. Putting names to faces was difficult, as awkwardly each of us hedged around who we were actually talking to. This was due to the fact that many had developed the 'ageing' symptom of lost hair — or at least grey hair — not to mention the much-added weight of old age. Gone were the youthful faces and physics of yesteryear. This was highlighted in the many Long Kesh photos of the early- and mid-1970s that were placed on display boards around the hall. The former prisoners and families had gazed at the photos with joyful and surprised disbelief

Joe O'Donnell, Sinn Féin Councillor and Belfast City's Deputy Mayor and a Long Kesh prisoner at the time, gave a speech that encapsulated the feelings of those days. Joe also spoke about how we look back on it from the present day. This was not just a night of romantic nostalgia but a reflection on the harshness of imprisonment, how republican resistance had overcome those many repressive conditions, and amid such conditions, how republicans maintained their discipline and sense of dignity.

Angela Nelson, a former Armagh prisoner, gave an emotive speech about how the female prisoners had supported their comrades in the Kesh, and described the takeover of Armagh Prison during the immediate days after the burning. Angela went on to describe the feelings of solidarity among Armagh prisoners and the similar harsh conditions at the jail.

On the night, no one really sat at their own tables. The lads filtered in and out of each other's company, reminiscing about that cold night in October, how many stitches each had received, the aftermath and shanty huts that were built out of the remaining rubble, the CR gas campaign and those who have since passed away. Two names came to many that night. Tony 'Cat' Bradley and Paul 'Winker' Watson had died only a few weeks previously and had planned to go to the event. Each of us talked about how the two lads would have enjoyed the evening with old comrades.

It is difficult to summarise the evening. Most people promised to keep in touch and hoped it wouldn't be another 30 years before old comrades would meet up again. Joe O'Donnell expressed the desire that we would dedicate ourselves to helping other former prisoners who may have fallen into bad times. It has been recognised that many republican ex-prisoners have emotional problems, which has led to broken family relationships and the symptoms of alcohol abuse.

Coiste na n-Iarchimí has achieved a lot in giving support to those who had issues relocating back into the community. But as Joe O'Donnell said, it is up to all of us to reach out to those who need help.

The night for me had two particular aspects. One was the joy of meeting some old heads — many bald and grey — and the other was to direct my mind back to the days when hundreds of republican prisoners rallied and protested in unison, not only amidst the burning rubble of Long Kesh but also in Armagh, Crumlin Road and Magilligan Prisons. Long may we remember the sacrifices.