DUP must get real 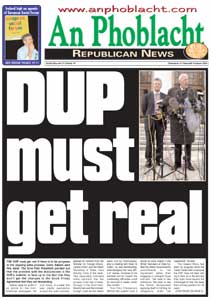 The DUP must get real if there is to be progress in the ongoing talks process, Gerry Adams said this week. The Sinn Féin President pointed out that the problem with the discussions is the DUP's inability to face up to the fact that they won't get the changes to the Good Friday Agreement that they are demanding.

Adams made his points in an article for the Irish-American newspaper, the Irish Voice, in a week that saw media speculation around the talks process, sparked by remarks from the Minister for Foreign Affairs, Dermot Ahern, and the British Secretary of State, Paul Murphy. Early in the week, they separately indicated some optimism that the process could see a breakthrough in the short term. Murphy had said that a breakthrough could be just weeks away, but by Wednesday, after a meeting with Ahern in Dublin, he was backtracking, acknowledging that "very difficult" issues remained to be resolved and he "hoped" the outstanding difficulties could be resolved in weeks rather than months.

The reason there has been no progress since the Leeds Castle talks is because the DUP have not been willing to face up to the fact that they must move beyond the intransigence that has been their primary position for 30 years.

Gerry Adams wrote in his article that while a breakthrough is possible, "better to wait until it is actually achieved before flagging it up". What is clear is that such confusing signals from the governments are less than helpful.

"At Leeds Castle the two governments told the world that they were satisfied that the IRA was going to make an unprecedented contribution to the process. The DUP appeared to hit a wobble," wrote Adams. "It was obvious to everyone that the IRA would only move in the context of a comprehensive agreement. As I said at the time the IRA was unlikely to move for less than the Good Friday Agreement.

"So where stood the DUP? For their part they have been sending positive signals. They said they were for power sharing. Ian Paisley visited Dublin to meet with the Taoiseach as part of a publicly stated desire to build good neighbourliness. All this was positive and welcome but a month after the Leeds Talks the process is no further on. If the governments are satisfied with what they have proclaimed the IRA is going to do, then who are they waiting on? Obviously, the DUP. And if Ministers Ahern and Murphy have said there is going to be a breakthrough, then clearly the logic of their position is that this must be coming from the DUP. I see no evidence of that, though it is possible.

"As I understand it, the DUP are seeking changes in the Agreement which would alter its fundamentals. The governments have ruled this out, and I hope they are serious about this. But I have concerns, not least because both governments have tampered with the Agreement already. The suspension of the institutions is one example of this. The power that a British Minister now has, contrary to the Agreement, to take action against Irish political parties, is another example.

"The DUP are also making their own particular demands of the IRA at a time when their newly proclaimed conversion to power sharing has yet to move beyond the rhetoric. In fact, in every local government council where the DUP has majority power in the north of Ireland they refuse to share power. There is also the issue of policing. The DUP is a devolutionist party and obviously it would like to see the powers of policing and justice transferred from London to Belfast, but thus far it has resisted efforts to do this. Why?"

Adams believes there is still a mountain to climb for Ian Paisley's party. "Sinn Féin is leaving no stone unturned in our effort to bring about a breakthrough," he said. "The big question arising from the Ministers' remarks is what do they do if there is not a breakthrough? How long must we wait for the DUP to come into the real world?"

Speaking on Monday, Sinn Féin Chief Negotiator Martin McGuinness made it clear that "the fundamentals of the Agreement, including the checks and balances which are of such crucial importance to nationalists and republicans, will not be bartered or negotiated away by Sinn Féin. Demands for a unionist veto over Ministerial Executive authority or the institutions, or a return to unionist rule will simply not happen.

"Progress will only be made on the basis of the framework laid out in the Good Friday Agreement," he said. "There is no other way forward."